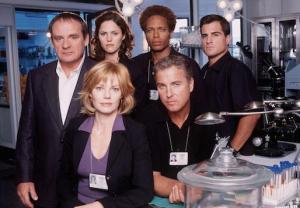 CBS is sending CSI off into the sunset in style.

The network confirmed on Wednesday that the former juggernaut will end its 15-year run with a special movie event to air on Sunday, Sept. 27. Original cast members including William Petersen and Marg Helgenberger are among the CSI MVPS set to return for the swan song.

CSI was a breakout hit when it debuted in 2000, averaging 20 million viewers by the end of Season 1 and ranking among TV’s top 10 shows. In Season 5, it hit a peak audience of 26 million viewers. It also launched the spinoffs CSI: Miami, CSI: NY and, most recently, the just-renewed CSI: Cyber.

The cancellation writing was on the wall since October, when CBS trimmed the show’s Season 15 episode order from 22 to 18. CSI ended the year with an average audience of 8 million viewers.