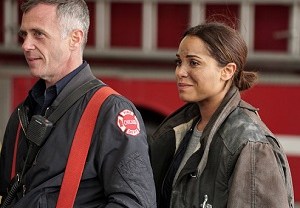 If you want to find out what happened to Chicago Fire‘s MIA Casey after Tuesday night’s shocking season ender, you may have to watch Chicago P.D. this fall.

With the mothership series not set to return until November, executive producer Matt Olmstead tells TVLine, the cop spinoff could hold all the answers.

“That’s what we’re dealing with now that staggered start,” he says. “Obviously, both shows exist in the same universe. We’d definitely have to deal with any kind of cliffhangers on the first one up.”

Add to that the fact that P.D.‘s Voight and Antonio play an integral role in the Casey twist, and the EP reaffirms that that particular storyline most likely will need to be resolved on the offshoot.

“I think we’re going to have to, unless you drop them into some kind of space-time wrinkle, which is not the preference here on our end,” he says. “It is a cop story, anyway.”

TVLINE | Are we to assume that Casey’s been kidnapped or that he’s being framed for Katya’s murder?
Maybe both. We left it open, and we have a couple ideas on the board — a combination of that or one of [those].

TVLINE | Can we at least cross off that Katya was there for personal reasons? Because there was a little bit of a connection between her and Casey.
There was. Her going there for help and being at the wrong place at the wrong time is a possibility. Her being forced to go there and try to lure him out is a possibility. Getting all the participants in one room and trying to see what’s going on and it going south is another possibility.

TVLINE | But she wasn’t there for romantic reasons?
No. We wanted to play a little flirtation more so on her part, but we never fully wanted to go down that road.

TVLINE | Gabby went over to Casey’s to tell him she’s pregnant. What’s the policy on pregnant firefighters?
It’s interesting, because they can’t be a firefighter. They’ll fall back to Ambo. The alternative is getting a desk job in the fire department while you’re still pregnant. So of the many things she’s dealing with is the fact that she’d have to be reassigned off the truck.

TVLINE | Despite the fact that this could potentially jeopardize her job, is it at least a blessing in that it might bring her and Casey back together?
Strangely enough, that’s the least of her considerations. The first thought in her head isn’t, “Oh, great. This will bring us back together.” The first thought is, “OK, I’ve got to deal with this. And I’m going to go inform a guy that, obviously, I loved” – and she loves still in a sense – “but we’re not together anymore. So I don’t want him to make any decisions based on an external impetus.” She’s just too proud. So if there’s a point where she believed that he wants back the relationship on his own terms, I think she’d go for it. But this isn’t Little House on the Prairie where, “I’m not going to survive unless there’s a man in the house.”

TVLINE | Can you hint about what Casey’s reaction to the news would be?
He’d try to downplay his shock and right away be protective and say, “Great, what are we going to do? Let’s get married. What do you need me to do?” It’s not like, “Whoa, whoa, whoa.” Then [he would] figure out his own feelings about it later.

TVLINE | How mad is Gabby going to be at Antonio for what’s happened to Casey?
There is some blame to go around, especially as it relates to Voight. Voight goes and gets Casey to step up, and it goes south. I don’t think even Voight knows the full depth of what’s going on in this place. Everybody’s pointing the finger, but no one was fully formed. But that’s to be dealt with down the road. Obviously, the first concern is: Where’s Casey? 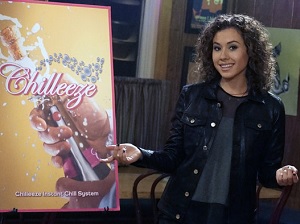 TVLINE | You had some new cast additions this season, one of whom — Rice — left. Can we expect Chili (played by Dora Madison Burge) to stick around permanently next season?
Yeah, for sure. I love what the actress is bringing. We all do.

TVLINE | It feels like you’ve finally filled all the slots, but will there be some more shifting of job positions?
We’ll have room for a new candidate to come into Truck, but beyond that, it gets a little too musical chairs. We want to settle down with the current roster.

TVLINE | Will the Brett-and-Roman romance continue between the two shows next season?
Yeah. We spent some time in both rooms before we broke for hiatus, and there’s some cool stories that came from those two. So we are setting them up as a couple.