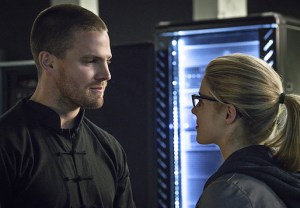 The following recap, by the very definition of the word “recap,” contains major spoilers from the Season 3 finale of The CW’s Arrow.

OK, who in their office pool had “Oliver and Felicity ride off into the sunset, all Danny and Sandy-like, with nary a care in the world” as the ending for Arrow Season 3?

Nobody? Yeah, me neither. Which is not to say that Oliver isn’t deserving of some R&R, but… no little “sting” at the end, suggesting a new danger around the proverbial or actual bend…?

The closer opened with Oliver and Ra’s (and captive Nyssa) in a plane bound for Starling City, while Felicity, Diggle & Co. survived their “poisoning,” having been secretly inoculated by Malcolm upon their imprisonment in Nanda Parbat. As for the matter of being chained up, that’s where a fleet-footed friend comes into play — Barry Allen, making good on the favor he owed Oliver at the end of this week’s The Flash. Alas, Barry can’t stick around to help with the Starling City/bioweapon sitch, since he has a hot date with Harrison Wells. (Apparently he didn’t get the “needs of the many outweigh the needs of the few or the one” memo that Ray did.)

Meanwhile up in the sky, sabotaged engines fail and tensions in turn rise, setting the stage for 1) Oliver’s declaration, “My name is Oliver Queen!” and 2) an in-flight skirmish, pitting him and Nyssa vs. Ra’s and his men. Ra’s winds up with the upper hand and leaps from the plane with the only ‘chute; Oliver then gives Nyssa a crash course (oops, too soon?) on how to land a plane, which the two of them do… not entirely gingerly, but fine enough.

There in Starling, Malcolm hands out assignments to the team on how to assess and possibly neutralize the Alpha Omega threat. Just then, Oliver and Nyssa arrive, met by glares, curt words and a thick air of distrust. As Oliver attempts to explain his grand plan, one thing becomes clear to Felicity — he never expected to survive that plane ride, he was going to go down in flames with Ra’s and the bioweapon. Diggle jumps in to say that they have “bigger problems than hurt feelings and broken trust,” and as they try to track down Ra’s, they discover that the League boss’ friend-turned-foe, Damien Darkh, is in town — and is just as much Ra’s’ target as the city itself.

Swooping into Darkh’s hotel room, we for a second suspect that the always awesome Christopher Heyerdahl is playing this new player, but he’s merely an agent for Darkh, who left town the minute he got word of Ra’s’ arrival. Ra’s then calls to taunt Oliver with the fact that he already set in motion his plan to unleash the A/O on Starling via four separate vessels — his own men, Diggle ultimately deduces, as the team sweeps the streets. A suited-up Thea takes out one guy, and Canary another, while Ra’s summons Oliver for a meeting… atop a dam. Ra’s chides Oliver for passing on the offer of a lifetime, to which Oliver counters, “What you were offering wasnt living.” A swordfight ensues, and rather amazingly neither of the men gets pitched over the railing into the ominously churning dam waters. And then Oliver emerges victorious, running a sword through Ra’s.

It is then, however, that the conspicuous setting comes into play, as trigger-happy SCPD shooters pump Oliver full of lead. The momentum sends Ol toppling over the railing, plummeting toward the waters far, far, far below… until the A.T.O.M. swoops by and scoops up the falling hero. Except, it’s not Ray in the suit — he was, after all, busy manning the nanites that were dispersing inoculate to the city — but Felicity.

Yes, Felicity in a matter of minutes got strapped into the suit, managed take-off and navigation to the point that she could pull off that 90-degree turn up alongside the waterfall, aimed perfectly to intercept Oliver, and then stuck the landing.

Not one of the show’s more sensible moments, no. Anywho….

Reassembling the team (Thea, Malcolm and Nyssa included), Oliver notes that they won tonight because he wasn’t alone, and that even if he had died the crusade would live on. Because of that, and seeing as his time with Ra’s took the Arrow identity from him (?), Oliver decides it is time to leave town and further explore the “someone else” that Felicity said earlier he had become — “if you come with me,” he says to his No. 1 gal.

Diggle has issues with Oliver’s plan to bail — “I’m no superhero,” he argues — but agrees to “think on it” (as well as the idea of concealing his identity moving forward). Later, Malcolm says goodbye to Thea, who admits that, at the very least, “you’ve made good by your promise” to make her stronger. Oliver meanwhile assures Malcolm, “I’ll never forgive you for what you did to Sara, or my sister, ever” — but perhaps they can avoid becoming archer enemies again if Malcolm holds up his end of an unsaid “bargain.” And later, we see that Malcolm has taken over as the new Ra’s, much to Nyssa’s distaste.

Elsewhere, Ray is tinkering with some new “miniaturization” tech on the A.T.O.M. suit when it and the upper floors of Palmer Technologies goes kablooey.

The finale closes with Oliver delivering a variation on his old voiceover, saying, “I returned home with only one goal — to save my city. And I did. But now it’s time for me to be someone else. Soemthing else.” As we cut to an idyllic, warmly lit vista of him and Felicity tooling around in a convertible, alongside a picturesque oceanside. “Can I say something strange?” he asks his partner. “I’m happy.”

What did you think of the Arrow Season 3 finale?