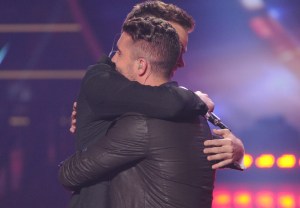 A good American Idol finale is kind of like the Fountain of Youth — and that’s not only a reference to 43-year-old Ricky Martin, 45-year-old J.Lo and 44-year-old Jordan Knight taking the stage and looking like they halted the aging process back in the late ’90s.

After 13 grueling weeks of voting — encompassing some 250 competitive performances and a pupu platter of “Wait! Noooo!” eliminations — it’d be easy for even the most committed Idoloonie to feel drained, dazed and depleted. And yet tonight’s Season 14 capper proved so fun, so festive and so jam-packed with music — most of it actually pretty good! — I’d be game if Fox told me they’d scheduled the show’s 15th (and final) season to kick off in June. (Don’t get it twisted, ABC. I’m in no way asking for Season 2 of Rising Star.) 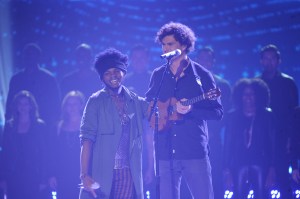 The elegantly hypnotic Quentin Alexander brought us a flawless “Riptide” alongside Vance Joy. Eliminated-too-early Sarina-Joi Crowe and Adanna Duru served up ’70s realness alongside Nile Rodgers on a medley of Chic hits. And let’s not forget solid moments for Joey Cook (harmonizing sweetly with Echosmith), Jax (writhing on the judges’ table with Steve Tyler) and Tyanna Jones (fronting a geriatric Jackson 5).

Oh, and did I mention Rayvon Owen — freed of competitive pressure and delivering a superstar-level vocal on a duet of Jamie Foxx’s (really great) new single “In Love By Now”?

Whoops! Sorry, folks! I’m burying the big news, of course — which, put in the terminology of the board-game Clue, would go a little something like this: “Ryan Seacrest, in a tux, with the results envelope!”

Would it be season-long front-runner Clark “Church in My Howl! Not a Whole Lot in My Eyes!” Beckham, whose status looked cloudier after clashing with mentor (and possible future boss) Scott Borchetta and stumbling in the final weeks of the competition?

Or would the confetti shower go to Nick “King of Consistency — Maybe ‘Cause I Never Leave My Lane!” Fradiani, whose month-of-May crescendo included a vastly improved stage presence and a coronation-single performance that converted even Doubting Cowells such as yours truly into loopy, unmedicated Paulas? 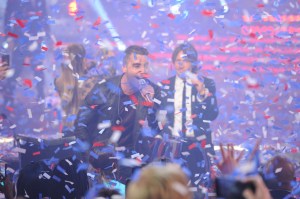 At the end of the zippy two-hour telecast, the lights were dimmed (by Kieran, thank goodness) and Ryan dropped the bombshell: The winner of American Idol Season 14 is… NICK FRADIANI!

As I said in my recap of Tuesday’s show, Nick was the correct choice from Season 14’s Top 2. As Clark increasingly performed like he was ambivalent about the grand prize, Nick began looking hungrier, singing more passionately and ultimately capping it off with a last hurrah that cracked my list of the 35 Greatest Idol Performances Ever. Unlike a lot of modern pop stars, he sings consistently in tune and knows how to fully inhabit a lyric — and with Scott Borchetta’s considerable marketing muscle behind him, Nick might just be the show’s next legit success story.

In other words, “Congrats, Mr. Fradiani!” 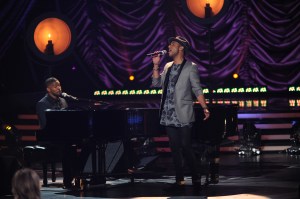 Best Vocal (by a Season 14 Contestant)
Rayvon Owen & Jamie Foxx — “In Love By Now”: I mean, honestly, that was utterly sublime. I’m not convinced that the competition really brought the best out of the handsome, hat-loving soul singer, but if this duet (of which Rayvon was definitely the star) is a sign of things to come, he’ll have a very fruitful career.

Performance of Which We Will Never Speak Again
Daniel Seavey and NKOTB — “Please Don’t Go Girl”/”Step By Step”/etc: Was it just me, or did it seem almost cruel to put so much emphasis on the cute but vocally limited teenager? This would’ve been a lot more fun if Daniel had been joined by Qaasim, Quentin, Rayvon, Nick and Clark, don’tcha think?

Least Gracious Duet Partner
Why bother having Janelle Monae take the stage with her new single “Yoga” — a major downgrade from her best tunes, if I’m being honest — if she wasn’t going to let Adanna Duru sing so much as a verse? It didn’t matter, though: The Idol grad’s mic may or may not have been on, but her thigh-high boots and killer dance moves were turned all the way up. Rated Y… for Yes, Girl, Yes!

Most Improved
I winced upon hearing Idol was asking Clark Beckham to reprise one of his most listless performances of the season — “Takin’ It to the Streets” — for the finale. But jamming out at side-by-side pianos with Michael McDonald brought out the best in Clark’s vocals — with his Rev. Beckham howls on the final refrain hitting harder than they have all season. 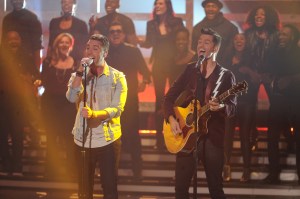 Separated at Birth Award
Nick Fradiani didn’t look the least bit intimidated joining Andy Grammer on his hits “Back Home” and “Honey I’m Good” — the latter number proving to be the night’s most rollicking, crowd-stirring moment. Of course, maybe Nick seemed so at home because he and his duet partner look (and even sound) eerily similar. (Hey, if one of ’em needs a stunt double for a future video, they know who to call…)

The RuPaul’s Drag Race Prize for Shameless Lipsyncing
I’m still scratching my head over Idol bothering to give Chris Brown a mic to “perform” his new single “Fun” when he could barely be bothered to hold it up to his mouth. (In case you were worried: The blaring pre-recorded vocal track never skipped a beat.) Why couldn’t producers strip Brown of his airtime and give it to a deserving show grad — hrmmm…how about Melinda Doolittle? — rather than waste our time with such a mess? I mean, it’s not like Brown giving finalist Qaasim Middleton a few seconds of the spotlight really made up for it. 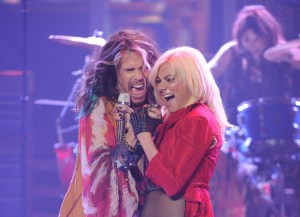 Having the Most Fun
When in Steven Tyler-ville, do as Steven Tyler does. Which is why I couldn’t help but smile as he and third-place finisher Jax wound up on their backs on the judges’ table wailing their faces off on Janis Joplin’s “Piece of My Heart.” Now, who wants to place bets that Jax joins Nick on the artist roster at Scott Borchetta’s Big Machine before the summer’s over?

Most Unexpected Surprise
Just like Tina Turner wonders “What’s love got to do with it?” I couldn’t figure out why Quentin Alexander had been paired with Vance Joy. Yeah, I know the sixth-place finisher had tackled “Riptide” in Hollywood Week, but somehow I’d been holding out hope for Erykah Badu. All that daydreaming went “poof!” and disappeared though as I got totally caught up in the blend of Quentin and Vance’s disparate voices. 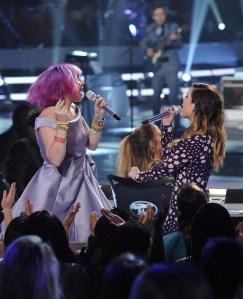 Best Vocal Completely Outside a Contestant’s Genre
I wish Idol producers had hooked Joey Cook up with a modern jazz collaborator and given her a chance to tackle the kind of music at which she truly excels. That said, she was pretty terrific pairing up with Echosmith on their hit “Cool Kids.” Fingers crossed she and Idol bestie Quentin tour together sometime soon — I will definitely buy a ticket!

Greatest Disparity Between Contestant and Special Guest
Tyanna Jones’ bright, shiny dance moves and bell-clear vocals only made the Jacksons seem that much more feeble on a medley of “I Want You Back”/”ABC”/”The Love You Save”/”Shake Your Body Down to the Ground.” 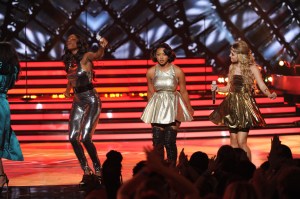 Singing Well Is the Best Revenge Prize
As I mentioned above, Sarina-Joi and Adanna were especially flawless trading vocals on “We Are Family” early in the telecast, and even Maddie Walker (wayyyy outside her genre) was totally in tune on her part of the Chic melody, too. Not such a bad showing for the first three contestants evicted from the Season 14 finals, eh?

OK, your turn. Did the right person win Idol? Who gave your favorite performance? What moments did you love/loathe? And did J.Lo have an auto-tuned mic on “Diamonds” or has she invested in some serious vocal lessons? Sound off in the comments!
https://www.youtube.com/watch?v=SZqAwYIJ42k