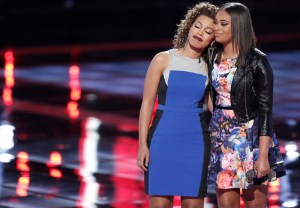 Better to be struck down one week short of The Voice performance finale than to never make the semifinals at all? That was the question facing the Season 8 Top 5 as they learned which three of ’em would serve as ladies- and/or lords-in-waiting at Sawyer Fredericks’ upcoming May 19 coronation ceremony. (Oh, let’s not feign shock, folks, the kid’s win is as inevitable as Adam Levine purchasing another $500 pre-weathered t-shirt before summer’s end.)

Still, despite the absence of suspense surrounding the identity of the successor to Craig Wayne Boyd’s crown and sash, Carson Daly managed to throw a few twists our way — enacting a “safe,” “safe,” “in jeopardy,” “safe,” “in jeopardy” announcement order instead of the typical “save the bad news for last” episode structure. (Sorry, folks, I tried to make that sound exciting!)

Anyway — I’ve got American Idol‘s Season 14 performance finale to recap in about 13 seconds — so I’m gonna cut right to the chase!

Singoff for the Twitter Save
Team Xtina: India Carney — Kelly Clarkson’s “Dark Side” — Grade: C- (yikes — what happened!? And do you think Xtina regrets not pushing for Kimberly Nichole to win last week’s Save?)
Team Pharrell: Koryn Hawthorne — Beyoncé’s “If I Were a Boy” — Grade: B+

Naturally, I did what I could with only 140 characters, as evidenced below:

For once, it was not all in vain.

OK, your turn. What did you think of the Season 8 semifinal results? Did America get it right with the Bottom 2? Was the right artist saved? If not, what would you have done differently? Sound off in the comments!
https://www.youtube.com/watch?v=SZqAwYIJ42k