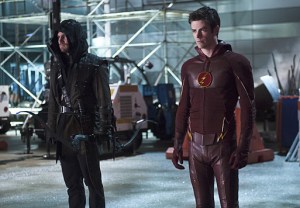 This week on the penultimate episode of The CW’s The Flash, Barry enlisted a supervillain — and then some superfriends — to help contend with Dr. Wells’ latest ploys. In the end, was The Flash fast enough, or again 1,000 steps behind?

Having discovered that A) Wells has refurbished the particle accelerator, B) plans to use it for, well, something and (C) has been hiding out under their noses the whole time, Barry & Co. realize that if the tunnel is turned back on, it will fry everyone in the Pipeline. Thus, their first order of business is to get everyone to safety — which of course is far easier said than done, when dealing with teleporters, weather wizards, mind controllers and their ilk.

When Joe’s bid to have the city shut barricade a route that they can safely shuttle the baddies to Lian Yu via the Ferris Air strip gets shot down, Barry goes against his better wisdom and calls upon Captain Cold to keep the metahumans on ice during transit. In trade, Snart asks that every trace of him be removed from all criminal data bases. Against Joe’s advice, Barry complies.

But then, even though Cisco has outfitted the truck to suppress the metahumans’ powers, the system shorts out, affording Deathbolt, Rainbow Raider, Weather Wizard, Peek-a-Boo and The Mist opportunity to run amok once at the airship, where Cold has crashed their lift to Lian Yu. Following an intense, fun, super-powered skirmish that you just couldn’t look away from, where arms-waving Barry and pistol-toting Joe labored to fend off the fiends, Cold iced Deathbolt but let the others go free.

Afterward, Barry laments his decision-making and his inability to make tough calls a la Oliver/The Arrow — but Joe counters, “That’s not the kind of hero you are…. So please, no more walks on the dark side.”

On the heels of this bit of insanity, Cisco realizes that the particle accelerator is now fully charged, thanks to the futuristic power source Wells/Eobard had waved around in front of Eddie. Now it’s a matter of preventing it from being used to whatever nefarious end. The Flash thus faces off against Wells, and he’s not alone but accompanied by Ronnie/Firestorm and Oliver/Not Exactly the Arrow But That’s Too Much Exposition for a Crossover Episode Not Synched Up With Arrow’s Timeline. “This will be fun,” Wells gloats before transforming into Reverse-Flash and taking on the trio. Importantly, Oliver came toting special arrows that Palmer Technologies rigged to suppress the Reverse-Flash’s speed. That allows for a few beat-downs, but then Wells shakes it off, waves away Firestorm and gains the upper hand on Oliver. Reverse-Flash goes for the Vibra-Hand kill when Barry tackles his foe, seguing into a chase around the S.T.A.R. Labs roof. Ronnie flies back into action and helps Flash lob the man in yellow off the rooftop and onto a car below. For good measure, Oliver puts another Ray Palmer Special into the dazed speedster.

One quip about Oliver’s new look later, Barry finds solace in the fact that the Reverse-Flash has been caught, and with a whole season finale to spare!

Elsewhere in the episode:
* After they find Eddie in the underground chamber, Iris realizes that her beau was going to propose the night he was grabbed. But when she asks him about it, he says it’s not meant to be, that Eobard showed him the future and Iris West-Allen’s place in it. Iris argues that she loves who she loves and that is enough to write their future, but Eddie notes that there’s the ongoing Barry of it all, that her “best friend” has always been a part of their relationship. “Barry knows it, Joe knows it, and even I knew it,” Eddie says — though he hoped he could change it. “If you really love me, let this die,” he says — and a tearful Iris agrees.

* Lisa Snart played with poor Cisco’s emotions/red-blood male instincts in a charming, sexy way, even coaxing from him her nifty nickname: The Golden Glider.

* Priot to (nearly) killing Oliver, Eobard reveals that Mr. Queen lives to be 86.

What did you think of “Rogue Air?