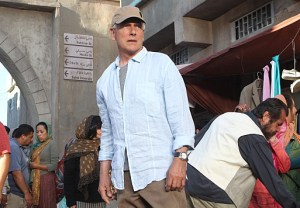 As the CBS drama closed Season 12 on Tuesday night, Gibbs, DiNozzo and CIA Officer Joanna “Dorneget’s Mom” Teague tracked abducted young Luke to Zakho, Iraq, where he has been spirited away by the kid-targeting, coded music-employing terrorist group known as The Calling.

Once there, Gibbs split off from the others to track a suspicious girl. DiNozzo meanwhile took a call from Daniel Budd, the leader of The Calling, which already had targeted with S-bombs a marketplace in Egypt, the Grand Canyon and, likely next, the Supreme Court justices.

Budd taunted DiNozzo, dismissing the “terrorist” label assigned him and contending that he simply wants to be “heard” and respected. Meanwhile, the suspicious young girl gave Gibbs the slip, her purpose seemingly served. And what might that purpose be? Seemingly to lure Gibbs into the open, so that Luke — yes, very young, orphaned Luke — could pop Gibbs twice with a pistol, once in the leg and again in the chest.

Boss is down, folks. And the sad irony? It was at the hand of one of the very youth he had been worried for earlier in the hour, in conversations with Ghost Mike Franks. As Mike in fact warned, Gibbs gets so caught up in saving people, who will save him?

But is he down for the count? Hopefully NCIS’ 13th season premiere is a lucky one for Jethro!