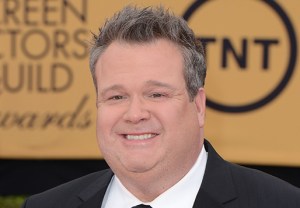 The upcoming TV movie chronicles the 1991 Supreme Court nomination hearings, in which lawyer Anita Hill famously testified against Clarence Thomas about reports he had sexually harassed her.

Per The Hollywood Reporter, Stonestreet will play lobbyist Ken Duberstein, who was assigned by President George Bush to get Thomas appointed to the high court.

* Despite rumors that he would leave at the end of Season 40, Saturday Night Live staple Kenan Thompson confirmed on Monday that he will return for the show’s 41st year.

* Ahead of Mad Men‘s series finale, AMC will air an every-episode-ever marathon, beginning with the pilot on May 13 at 6 pm and ending with the final episode on May 17 at 10 pm.

* USA Network has ordered to series Queen of the South, its drama project based on the novel by Arturo Pérez-Reverte. The 13-episode series, which follows a young woman who infiltrates a Spanish drug-trafficking ring, will premiere in 2016.

* History has released a new trailer for Texas Rising, its 10-hour event series starring Bill Paxton, Jeffrey Dean Morgan and Ray Liotta (among many others). Get your first look with the two-minute video below: