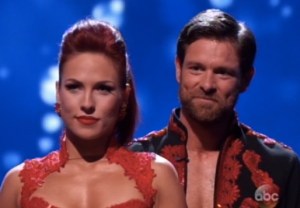 Monday’s performance show for the Dancing With the Stars semifinals didn’t technically have a theme, but I’d like to propose one that became evident during the two-hour broadcast: “One of These Things Is Not Like the Other.”

It’s hard to openly discuss this season’s Final Four without acknowledging the Insensitive Elephant in the Room: Even though Noah Galloway has been nothing short of inspirational in his efforts on the dance floor, he just can’t match Rumer, Nastia and Riker in their skill and range.

I imagine this is a dilemma that Carrie Ann, Len, Julianne and Bruno face each week. Noah can’t help lacking in certain areas — grace, fluidity, et al. — but when those elements are so crucial to great dancing, it’s hard to consider his presence in the semifinals totally fair.

Even Noah’s paso doble from Monday night, while among his best of the season, was vastly overpraised by a judging panel that seemed to overlook actual content in favor of cool tricks — or, as I like to call it, the Patti LaBelle Effect. Noah was totally committed to his matador character and showed off some serious physical strength in the number… buuuuut, when you look at the overall routine, it consisted of much less actual movement on his part than the judges might have had us believe.

And because I’ve already spent enough of this recap putting Noah on blast — I usually have a cheery disposition, I swear! — let’s revisit Noah’s sweet proposal to girlfriend Jamie Boyd, which even got resident cynic Tom Bergeron tearing up:

Feeling sufficiently weepy? Excellent. Let’s move on to some other highlights from Monday’s performance show:

BEST OF THE NIGHT | Rumer Willis and Val Chmerkovskiy (Contemporary Ballet) | I’ll be honest: My knowledge of ballet technique mostly comes from repeat viewings of Center Stage and Save the Last Dance (once was enough for you, Black Swan). But you don’t have to be a pro to know how rigorous and exhausting this dance style can be. Despite Rumer and Val’s limited knowledge of ballet, both dancers performed the choreography with such ease, they were practically skating across the ballroom floor.

BEST OF THE NIGHT: RUNNER-UP | Riker Lynch and pro Allison Holker (Contemporary) | I have a soft spot for any and all Allison Holker contemporary performances, thanks in part to this legendary So You Think You Can Dance number from 2010. (I’ll wait while you watch.) But Riker, as he has done for most of his Season 20 run, matched Allison at every step of this complex routine. No, his lines may not have been completely straight, and he may never be as emotionally in tune as his partner tends to be. But contemporary is such a specialized style of dance, and such a difficult one, that mastering this tricky choreography is a feat worth serious praise.

MOST SENTIMENTAL | Nastia Liukin and pro Derek Hough (Viennese Waltz) | Nastia’s current DWTS set-up — in which she basically gets to dance with whomever is feeling well enough at the time — has had me feeling a bit grouchy about her recent weeks on the show. But after watching Len reminisce on his glory days of dancing, leading to Nastia and Derek’s most elegant and genuine performance yet, my heart made like The Grinch’s and grew three sizes.

And now, those results:

“Last night was a magical night — not just for us, but for everybody here,” Liukin said. “To be able to finish my experience with that dance meant a lot.”

OK, your turn. Did Nastia and Derek deserve to get eliminated? Who are you pulling for in next week’s finale? Hit the comments!