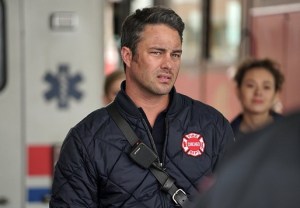 The tension was so thick between Truck and Rescue Squad on Tuesday’s season finale of Chicago Fire, I half expected the two groups to break into a musical number from West Side Story.

But before we dissect the us vs. them war, let’s get to the juicy stuff: Gabby finally realizes she’s not under the weather, but preggers! She heads to Matt’s place (to tell him the news, I assume), but instead finds it ransacked, Matt M.I.A. and Katia dead on the floor. Um… Where are Voight and Antonio, who promised to keep him safe?! Someone’s going to have a lot of explaining to do to his sister.

OK, back to the Chicago Side Story: After things get intense during a call, one by one, each Truck member sits down and puts their feet up on squad’s table as an act of rebellion and solidarity. Then there’s much yelling as Casey accuses Severide of being blinded by his friendship with Rice, which finally forces Severide to look into his pal’s story. And wouldn’t you know it, Rice was lying about his faulty regulator. He’s got a semi-compelling defense — he was scared of leaving his child an orphan — but so does Severide. 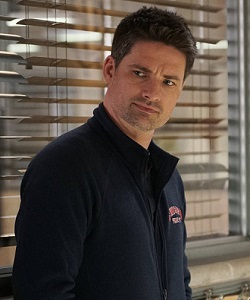 “There’s a lot of men with families in the CFD, but everyone when they report for this job puts it all out there,” Severide tells him. He just wasn’t ready to be back on the job, and so, Rice is fired. As a result, Cruz, who secretly got his certification, is promoted to Rescue Squad, while Otis finally gets to drive the truck.

The 51 bond is further strengthened when Boden risks his own life to save Dawson and Severide, and Cruz takes on another Chief, who’s about to cook the building the two are inside. When someone from high on up comes looking for answers, the entire firehouse takes the blame for threatening the Chief.

Elsewhere, Brett hooks up with Roman from Chicago P.D. (you go, girl!) and a competitor beats Chili to the market even after she got Scottie Pippen to agree to be the spokesperson for Chileze (poor girl!).

Chicago Fire fans, what did you think of the season ender? Got theories about what happened to Matt? Are you into the idea of another cross-show romance? Grade the episode via the poll below, then hit the comments to back up your pick!