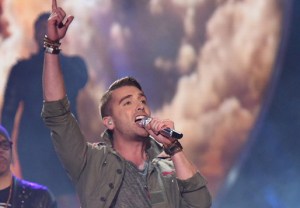 Those of you who enjoy the crack of a baseball bat against the ribs must’ve loved the opening segment of American Idol‘s Season 14 performance finale.

Clark Backham, Jax and Nick Fradiani began the hour dangled like slabs of meat above the lion’s cage, grimly accepting that one of ’em — despite having spent the week preparing a whopping three performances — was going to be unceremoniously dropped, his or her shrieks of agony drowned out by the cheering crowd preparing to celebrate its chosen Top 2.

Uff da. Forgive me for awkwardly mixing my sports and animal references — but I’m still trying to make sense of the myriad, conflicting emotions that coursed through my system during the rapid-fire one-hour telecast.

Jax — outfitted in a silver sack that was part “silver poncho you throw over an ailing marathon runner,” part “figure skater waiting for a seamstress to cinch her superhero-themed costume” — turned out to be on the wrong end of the results, based on last week’s performances. And after a quick hug and a wave of Ryan Seacrest’s arm, she was eliminated like the line on Jessica Simpson’s resume that says “recording artist.” (Too bitchy? You’ve never been assaulted by her “I Wanna Love You Forever” in the shampoo aisle at Walgreens, have you?) 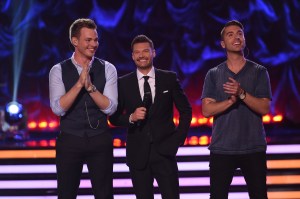 Jax’s ouster that left us with a head-to-head battle that — at least on paper — merely made me yearn for Joey Cook’s wicked creativity, Quentin Alexander’s deep well of moodiness, Rayvon Owen’s distinctive tone, even evicted-too-soon Sarina-Joi Crowe’s delicious sass.

But a funny thing happened as I tried to avert my eyes from mentor Scott Borchetta’s “Music Has Value” shoulder patch. One of the two inarguably solid dudes standing at center stage quickly and definitively drew me onto his bandwagon — a development I didn’t see coming.

Alas, it wasn’t Clark, whose early efforts on “Superstition” and “Sunday Morning” made him look like an unstoppable front-runner, until vocal inconsistency and a lack of gut connection to his songs (and emotion in his eyes) began to make him look vulnerable in the last few weeks of competition.

Instead, it was Nick — a guy who rarely misfired, perhaps because he rarely stepped outside his safety zone — who carpe diem-ed the bejeezus out of the hour, capping things off with a perfectly tailored original track that might give Phillip Phillips’ “Home” a run for Coronation Single Most Likely to Bombard Your Ears For the Next 18 Months.

So let’s get to my letter grades for this week’s performances: 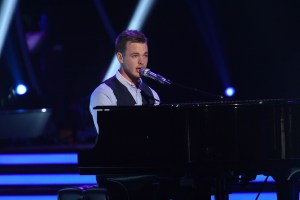 Clark Beckham: Ray Charles’ “Georgia on My Mind” — Grade: B | I’ll be the first to recognize I’ve been steadily less enamored of Clark ever since he peaked — to my ears anyway — on that bluesy-spectacular “Superstition” cover in Top 6 week. Yet while “Georgia on My Mind” was a reasonably good vocal, I was nevertheless distracted by Clark’s very practiced, “Look! I’m feelin’ it!” head sways — and their failure to disguise his somewhat sleepy energy on the verses. Not only that, but his Rev. Beckham howl in the final third of the performance steered more toward screamy than soulful. Given that, I’d rank Clark’s “Georgia” lower than Nick’s Round 1 reprise, plus Kendra Chantelle’s landmark Season 10 Wild Card “Georgia”  and Matt Giraud’s soulful Season 8 take, too.

Nick Fradiani: Matchbox 20’s “Bright Lights” — Grade: A- | Nick didn’t do anything to shake up Rob Thomas’ vocal template — not that this far into the season, he’d given me much reason to hold out such hopes. But the Connecticut hottie delivered every word of the lyric such gorgeous gusto — and with so much lively energy — that I found myself getting caught up in the story he was telling, even if he was ultimately coloring well within the lines of the original. J.Lo’s comment that Simon Fuller cooked up Idol specifically for a singer like Nick — “someone with voice, look, presence… everything that it takes” might’ve been a bit of hyperbole but Nick’s urgency throughout the hour was a clear message he wasn’t playing for second place. 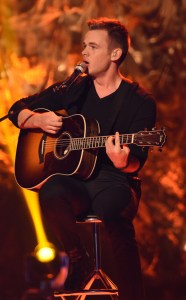 Clark Beckham: Bill Withers’ “Ain’t No Sunshine” — Grade: B- | Kudos to Clark for stripping down his arrangement to a simple acoustic guitar — the better to differentiate it from Kris Allen’s hard-to-beat Season 8 rendition. But honestly, I heard quite a few iffy notes in Clark’s lower register during the opening verse. Perhaps even more troubling, though, was that after giving us wonderful restraint in the opening half (and creating a real sense of tension in the process) Clark inexplicably shifted gears into screamer mode, almost as if he’d forgotten there’s any other way to end a performance.

Nick Fradiani: Jason Mraz’s “I Won’t Give Up” — Grade: B- | Wait, what? Nick plays piano? Well, bully for him! As with Clark’s Round 2 number, Nick also exhibited some problems with pitch — in particular on the rapid-fire bridge — but on the plus side, he also managed to pack more emotion into a 90-second performance than you’ll find in the entire climactic scenes of most modern rom-coms.

Coronation Single
Clark Beckham: “Champion” — Grade: B | I can’t be too too hard on Clark’s “Victory Anthem” performance, since dude got saddled with a verse that was too low for him and a chorus that stretched his upper register its breaking point. (Not only that, I suspect the song’s Katy Perry-meets-Ryan Tedder DNA probably doesn’t represent the kind of artist Clark wants to be in his post-Idol life.) That said, would it have been too much to ask for a little more excitement, a little more movement, a little more conviction from the blue-eyed soul-man? A song that’s written as the official anthem of the 2015 Women’s World Cup needs 10 gallons of rocket fuel, not a room-temperature bottle of Vitamin Water. 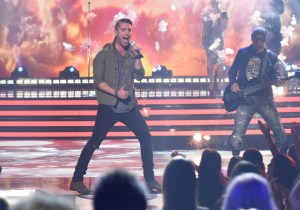 Nick Fradiani: “Beautiful Life” — Grade: A | If Nick winds up inheriting Caleb Johnson’s crown on Wednesday night, Idol historians can play back his “Beautiful Life” performance, slo-mo the three explosive fist bumps at the start of the first chorus and tell their students, “This was the moment he sealed the deal.” Unlike Clark’s tentative approach to “Champion,” Mr. Fradiani seemed completely sold on his song — and transferred those good vibrations right through the TV screen. I mean, my  response to Idol coronation ditties typically ranges from fetal position and groaning (“No Boundaries“) to “Did he just say ‘Magic Rainbow’?” (“The Time of My Life”), but as Nick chanted “This! Could! Be! The last night of our lives!” the best kind of chill went through my veins (and no, I don’t think it was the ghost of Danny Gokey’s “Dream On.”) Even more shocking? When the audience began to sway — in time with the music for the first time ever?! — I wasn’t even mad at ’em (although SwayBots will always be Enemy No. 1 in the Idoloonie Nation.) Instead, as Nick’s voice began to quiver with emotion on the line, “this is just one perfect night,” I started envisioning him getting his confetti shower. And if “Beautiful Life” represents the kind of jam he’ll be singing — and the conviction with which he’ll be doing it — then the House That Gave Us Lil’ Sweet might have a few more hits left in it.

But that’s just how I see it. How about you? Who “won” the night? Who should win the season? Did you hate the way producers kicked off the hour in such grim fashion? And what was the night’s best performance? Take our poll below, then sound off in the comments!