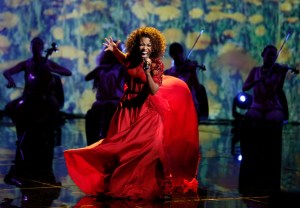 I hope you checked your cynicism at the door while watching The Voice semifinals, which featured the Top 5 contestants’ visits to their hometowns.

If you didn’t, you might’ve had horribly unkind responses at inopportune moments — like, for example, involuntarily gagging at a particularly unfortunate Voice-themed pizza presented to Joshua Davis on his return to Traverse City, Mich., or wondering “How many industry connections does one contestant need?” after Naomi Judd and Big & Rich crashed Meghan Linsey’s return trip to Nashville. (Quick poll: Will her A-list connections hurt or help Meghan with voters?)

Thankfully, we’ve got Pharrell Williams — megaproducer, N.E.R.D. member, falsetto-hook provider, grandpa-shirt aficionado and “Caught Out There” co-writer – to help recalibrate our earnest-o-meters. Take, for example, his glowing review of Koryn Hawthorne’s sickeningly good “Oh Mary Don’t You Weep” cover: “I know there’s somebody who watched this performance that was told ‘No’ today. They were told no. And after seeing that performance, it’s like you realize the impossible is just a word, because it can be done. And dreams can come true.”

Alright, alright… I surrender to the good vibrations! I’ll even promise to download Sawyer Fredericks’ debut CD and help this dang show make a household name out of its next inevitable winner. Are you happy, Peacock Network?!

Actually, I am, too, since — after a stutter-step start — the bulk of Monday night’s performances were pretty solid, if not spectacular. And on that note, let me get to doling out letter grades/reviews.

ROUND 1: COACHES’ PICKS
Team Adam: Joshua Davis — Bonnie Raitt’s “I Can’t Make You Love Me” — Grade: C+ | I’m not exactly sure why Adam bothered to assign Joshua one of the most heartbreaking ballads ever written — only to accept him delivering it with all the pain and despair of a guy ordering a soft-serve vanilla cone. I mean, sure, Joshua has a lovely scratchy tone, but there was so little oomph behind his words that I found my attention drifting to the fact that I couldn’t hear any sound coming out of his guitar on the opening verse — and on the way The Voice band violinist’s aggressive playing nearly overpowered him on the final third of the performance.

Team Pharrell: Koryn Hawthorne — U2’s “One” — Grade: B- | It’s not exactly “I Have Nothing,” but “One” is rapidly rising on my ranking of Ballads That Are Less Welcome on Reality Singing Competitions Than the Words “Special Guest Kim Kardashian.” Pharrell got the staging right by putting Koryn in a gleaming tunnel of lightbulbs, but the teenage diva’s performance never really ignited. Maybe if she’d dialed it back even further on the verses — an area where Koryn could really use some mentoring — the number might’ve built to a true emotional crescendo, but as performed, it was more hot plate than inferno.

Team Blake: Meghan Linsey — Sam Smith’s “I’m Not the Only One” — Grade: C | Uff da — Meghan’s approach to this lover-done-wrong ballad was heavier and more unnecessary than the ten-ton false eyelashes that’ve been obscuring her eyes the last few weeks. (For the love of Gwen Stefani, who’s styling this poor chick!?) The set piece — Meghan leaning against a wall in a moodily lit “room” — was evocative, and the opening verse showed a surprising restraint (despite a handful of flat notes). But by the bridge, Meghan was in full screeching-hawk-digging-talons-into-a-chipmunk mode — once again confusing volume with feeling. The fact that her big glory note was messier than a toddler eating overripe raspberries only added to the country vet’s yo-yo-esque bounce between the disastrous and the divine all season.

Team Xtina: India Carney – Sara Bareilles’ “Gravity” — Grade: B | Against a sparse backdrop of piano and strings, India dialed back the vibrato a bit and delivered one of her most delicate vocals of the season. Sure, her delivery can get a little theatrical in spots when from-the-gut emotion would be a better fit, and while it didn’t do anything to convince me she deserved last week’s Twitter Save over the incomparable Kimberly Nichole, I’d still rank her as second-best from the Coaches’ Picks portion of the telecast.

Team Pharrell: Sawyer Fredericks – Buffalo Springfield’s “For What It’s Worth” — Grade: A- | A tip of the (bowler) hat to Pharrell for hands-down the best song pick of Round 1 — a rock ditty that’s almost half a century old and yet still retains its topical urgency in 2015. “For What It’s Worth” proved a perfect fit for Sawyer’s timeless warble — and gave him a chance to show a bit of menace, too, on lines like “Paranoia strikes deep/ Into your life it will creep.” (Don’t dismiss him as simply adorable, America!) Yeah, I might’ve liked him to sing the melody line on the choruses rather than trying out ad-libs that put the focus on the weirdly positioned background singers, but that’s a minor complaint. At this point, it’s Sawyer’s world: We’re just voting and downloading in it.

ROUND 2: CONTESTANTS’ PICKS/HOMETOWN DEDICATIONS
Team Adam: Joshua Davis — The Band/Bob Dylan’s “When I Paint My Masterpiece” — Grade: B | I’ll admit I dug Joshua’s second performance slightly more than his first — since he at least brought a playful wink and added gruffness that shook some of the moss off his Soothing-Voiced Elder Statesman Bringing Coffee-House Realness persona. I’m with Xtina — Nate on the drums kinda stole the show — but I’d be foolish to discount Joshua’s chances on the finale, given the past successes of other contestants cut from similarly sensible cloth (see Nicholas David, Terry McDermott).

Team Pharrell: Koryn Hawthorne — “Oh Mary Don’t You Weep” — Grade: A | I’m surprised Carson Daly didn’t credit the Holy Ghost (complete with #DivineInterventionOnTheVoice hashtag) for providing harmony on Koryn’s gargantuan vocal performance. I mean, seriously, Koryn’s entire body seemed overcome with a feeling or an energy that was far beyond her tender years — and it left me utterly awestruck. Clad in a long white dress — and flanked by an army of similarly dressed background singers on platforms behind her — the southern teen took control of a fantastic, percussion-heavy arrangement and nailed nearly every note with the kind of passion that’d make legends like Patti and Aretha throw their hands (or at least one hand) in the air. I won’t lie and try to pretend I understood more than 20% of the words coming out of chica’s mouth, but I felt each and every one of ’em.

Team Blake: Meghan Linsey – George Jones’ “Tennessee Whiskey” — Grade: A- | I didn’t envy Meghan the task of following Koryn’s soul-scorching epic-ness. But the seasoned pro didn’t seem the least bit rattled as she placed herself in front of a row of burning barrels, engaged the band and oozed her way through a sexy-cool country jam that brought out the best parts of her growly tone. The only thing about the performance that felt odd to me was Meghan’s decision to return to a twang-y sound, after hearing all season how she doesn’t actually want to be a country artist anymore. But what do I know? In Blake (the guy who is never not in the finals) we trust, right?

Team Xtina: India Carney – Michael Jackson’s “Earth Song” — Grade: A | Ohhhhhhhh… so this is the vocal beast India Carney I’ve been hearing about for weeks now! Almost as if spurred on by naysayers (like yours truly) who insisted she had no business winning the Twitter Save over Kimberly Nicole, India came roaring out with a gorgeous, nuanced vocal that breathed anguished life into Michael Jackson’s planet-championing ballad (also a big moment for Haley Reinhart back in her Idol run). It didn’t hurt that Team Xtina outfitted India with a stunning red gown, a literal (but very cool) backdrop that went “woosh!” and disappeared midway through the song and so much wind that I had to double-check if gasbag Adam Levine was running his mouth again. (I kid! I kid!) India, almost a foregone conclusion for elimination this week, laid down a pretty bold challenge that, like the plague victim in Monty Python and the Holy Grail, she’s not dead yet!

Team Pharrell: Sawyer Fredericks — Christina Perri’s “A Thousand Years” — Grade: A- | Dear Pharrell, Let’s get one thing straight: Sawyer Fredericks does not need/benefit from background dancers. Not a pack of bopping Ariana Grande types like you gave him last week, and not a single, life-sized ballerina in a music box that he got for Top 5 night. So stop trying to make Sawyer + Dancers happen; it’s not going to happen. The good news is, Sawyer’s vocal on Christina Perri’s soaring love ballad was so pure of tone and perfectly in tune that I quickly forgot about that chick in the tutu (I mean the dancer, not Kimberly Nicole, whom I’ll NEVER forget) and was able to hear the very familiar lyrics like they were hitting my ears for the very first time. But enough praise for Mr. Fredericks — we need to make sure his head doesn’t get too big, seeing how he’ll have a crown to fit on it come this time next week.

OK, your turn. What did you think of The Voice‘s Top 5 performance night? Who were your faves? Who’s in trouble? How badly did you miss Kimberly Nichole? Take our poll below, then hit the comments to expand on your thoughts!