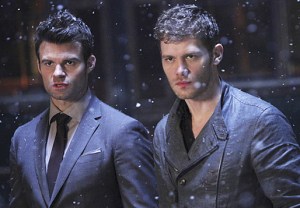 Monday’s season finale of The Originals (The CW, 8/7c) cues up the long-awaited — yet slightly unexpected — return of Claire Holt, the final battle with Dahlia and, according to executive producer Julie Plec, a whole mess of “emotional surprises.”

Below, Plec fields TVLine’s questions about the show’s lingering relationships, the future of Rebekah’s portrayers — both of whom are involved in other projects — and what kind of “closure” we can expect from the final battle.

TVLINE | I loved when Rebekah told Cami that Klaus “fancies” her. Will that be explored further in the finale?
It’s not that it’s going to be explored or unexplored; it just kind of a thing that exists under every interaction between them. I don’t necessarily know that there’s anything either of them are ever going to do about it, certainly not soon, but it’s a fascinating line that connects them. They’re two people who probably shouldn’t have any feelings for each other, yet they can’t resist having these epic, deep, emotional moments. I like that every scene if theirs is fraught with a little bit of that tension. Whether we decide to act on it or not, I can’t tell you.

TVLINE | Another twosome finally vocalizing their feelings is Rebekah and Marcel. What can expect from those two, now that Claire Holt is back?
He’s very glad to see that putting a knife into her own jugular didn’t cause permanent death. She’s sort of mourning her loss of free will, in terms of which body she can possess; it’s been her choice up to this point, but Klaus took that away from her. She’s got a lot to work out with her brother, and there’s actually a really nice moment where we get to see both Maisie [Richardson-Sellers] and Claire. We get to see our two Rebekahs in the same episode, which is a lot of fun. 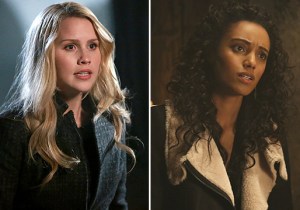 TVLINE | Speaking of those two, Claire is in Aquarius and Maisie’s pilot just got picked up. Can you say anything about Rebekah, physically, moving forward?
Well, we still have access to Claire, and I assume we still have access to Maisie. We spent two years juggling Daniel Gillies’ schedule when he was on [Saving Hope], so having to work around a little availability issue of two Rebekahs is … well, we’ve done harder things. I wouldn’t say it’s the last we’ll see of either of them.

TVLINE | Hayley telling Jackson she loves him for the first time was such a huge moment. Does this mean you’re officially putting Hayley/Elijah to rest?
When you have a couple that cares about each other deeply, and there are always things that stand in the way of that — first it was Elijah’s honor, now it’s Hayley’s marriage — that doesn’t make the relationship any less potent or fraught; it just makes it more difficult. Next season, assuming Hayley is able to get out of this predicament she’s been shoved into by Klaus, there are still going to be those feelings there. It’s just a matter of: What do they do about them?

TVLINE | That moment we see in the promo, where Dahlia tells the three siblings to prepare to meet their “end,” looks a lot like what Bonnie and Damon faced on The Vampire Diaries at the end of Season 5. Very mystical. What can you say about that final showdown?
Ooh, interesting! This final showdown actually has quite a few emotional surprises as our Originals are suffering and facing death at the end hands of their naughty aunt. They fight back with some psychological warfare that’s surprisingly poignant. It’s a great sequence, a fitting closure for this season and the storyline that’s been driving it from the beginning.

Fans, what are your hopes and fears for tonight’s Originals finale? Drop ’em in a comment below.