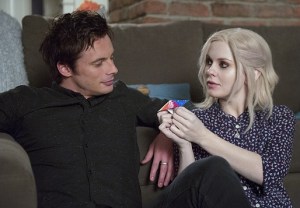 If iZombie‘s cliffhanger ending last week left you worried about the state of Lowell and Liv’s relationship, you are perfectly justified in your concern.

After discovering that baddie Blaine is her beau’s brain dealer, this Tuesday’s episode (The CW, 9/8c) brings an even more disturbing revelation for Liv: “Lowell and Blaine are old friends,” actor Bradley James tells TVLine, so perhaps his girlfriend should have expected this twist. After all, “The zombie community, I don’t think it’s that large,” James adds.

Couple this latest plot development with the fact that James is a recurring guest star (and the foreboding preview below), and we have to wonder if Liv and Lowell’s undead romance is built to last. Or is it doomed to fail because of what they are?

“There’s a much grander question there about love in general, surely,” the actor replies. “But I suppose the zombie factor does increase that intensity. I would say that – unless you’re the writer of the show – there is no set path for love.”

What started out as something that James thought would be a one-episode gig got extended when producers saw the chemistry between the Merlin alum and star Rose McIver — not that the humble actor thinks he in any way contributed to that decision.

“Rather than that being a result of me having done anything good,” he says, “they probably had it in their minds that they were going to [keep] Lowell for much longer, unless I turned out to be absolutely terrible and then it would have just been one episode.” (No possible way. As executive producer Rob Thomas previously told TVLine, “We knew from the moment we saw Liv and Lowell on screen that Lowell wasn’t going away anytime soon.”)

Viewers have fallen for Lowell, too — possibly even more so than Liv’s ex-fiancé Major — as the heroine has found herself taken by the British rocker zombie. But James acknowledges, “Major’s endgame. I think everyone’s aware of that.”

“It would probably be a bit dull for Rob [Buckley] if he just found himself being the straightforward love interest in that way,” he continues. “He’s more talented than that, and that’s why they explore different avenues to his storyline, which I think will really have a payoff for the fans later on.”

iZombie fans, who do you hope wins Liv’s heart: Lowell or Major? (Or perhaps you’re Team Ravi or Blaine?)