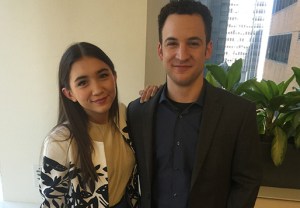 Less than two months after wrapping its freshman season, Disney Channel’s Girl Meets World is already back for Round 2 on Monday (8:30/7:30c) with a week of new episodes that force Cory and the gang to confront their pasts — including their past mistakes.

Stars Ben Savage and Rowan Blanchard recently stopped by TVLine to give us the scoop on Season 2, including which Boy Meets World reunion gave one of them “goosebumps.”

FEENY | “He has a great role in the premiere, and in ‘Girl Meets Pluto,'” teases Blanchard. “We go back to Pennsylvania and Riley and I do the Feeny call! It was so intimidating. You don’t want to mess that up, so Michael [Jacobs] would show us clips of Will [Friedle] doing it, then we would try to mimic him. Obviously we’re not as good as he was, but we tried.”

Obviously, we had to find out for ourselves how good Blanchard is at Eric’s iconic Feeny call. What say you, readers? Is she a natural?

ERIC | When Cory’s older brother returns in “Girl Meets Mr. Squirrels,” Blanchard says we should expect nuggets of “wisdom” from his famed alter ego. We shouldn’t, however, expect to find out whether or not Plays With Squirrels remained married to that moose with whom he allegedly swapped vows. “I don’t know if we address that,” Savage admits. “Maybe he’s still with the moose. Eric is a character where, really, anything goes.” Adds Blanchard, less hopefully, “Or maybe they went their separate ways.”

MR. TURNER | When we last saw Anthony Tyler Quinn’s character in 1997, he’d been pretty banged up, but you’ll happy to know he’s made a full recovery. “We do address that,” Savage says of Mr. Turner’s accident. “He has not been in a coma all these years; he’s been very active in our lives, so yes, he recovered miraculously.” (Mr. Turner returns in “Girl Meets New Teacher.”)

ANGELA | “This is one of the strongest episodes we’ve ever done,” Savage says of “Girl Meets Hurricane,” in which Shawn’s ex-girlfriend re-enters the fold. “We tie up a lot of loose ends.” Adds Blanchard, “We call it a ‘hurricane’ because it’s all these characters thrown into a situation where they have to come to terms with what’s happened in the past.”

CHET | Yes, Shawn’s late father makes an appearance on Girl Meets World this season, but no, he didn’t make a miraculous Mr. Turner-style recovery. “He comes back as more of a vision,” Blanchard explains. “There’s a specific scene where Shawn realizes it’s OK to be positive and he has a vision of Chet.” Adds Savage, “Blake Clark’s voice is so raspy. When we filmed that scene, I had a surreal moment where I was transported back to 1995. I got goosebumps.”

GMW fans, which characters from the original series are you most excited to see? Drop a comment with your thoughts below.