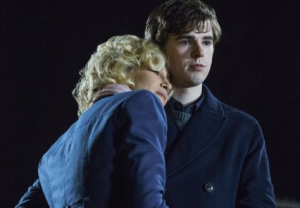 If you have yet to watch Monday’s Season 3 finale of Bates Motel, stop the car and turn around because spoilers await. Everyone else, you are permitted to enter the post mortem zone…

Below, showrunner Kerry Ehrin and castmembers Vera Farmiga, Freddie Highmore, Max Thierot and Nestor Carbonell answer burning questions about that killer cliffhanger, as well as Dylan and Emma’s big moment, Alex’s fatal transgression and what lies ahead in Season 4 (hint: Highmore in heels).

TVLINE | So, is Normal full-on Psycho now?
EHRIN | Yes, in the sense that anyone who has that [mental] disorder goes in and out of it. But he’s as deep into it as we’ve seen him.

TVLINE | Why did you decide to let the audience see “Norma”/Vera killing Bradley as opposed to Norman-as-Norma/Freddie killing Bradley?
EHRIN | We had a long discussion about that in the writers’ room. Someone pitched, “What if it’s Vera [killing Bradley]?” And I thought about it for a minute, because [co-creator] Carlton [Cuse] and I are very careful about [not] pushing into camp too far. But once we really thought about it, it got more exciting and interesting and fun. Also, it’s what’s really happening in his brain. And the goal of the show, at this point, is to get on the train with Norman so that you feel for him.

TVLINE | The camp challenge is going to intensify in Season 4…
EHRIN | It is. But challenges are what make it fun. I try to remind myself, “How would this look if it was really, really happening?” And then I try and stay in that place… Also, I can’t wait to dress Freddie up. [Laughs]

TVLINE | Bradley’s burial at sea — intentional Psycho parallel?
EHRIN | Yes. It seemed completely appropriate at that time to honor the original with that. It was beautifully shot by [director] Tucker Bates.

TVLINE | When Norma was scoping out that psychiatric spa, she quickly realized that there was no way she could afford to send Norman there. And yet, when she went home, she tried to sell Norman on it. Why would she do so, knowing it was cost-prohibitive?
EHRIN | Because she’s Norma. [Laughs] She’ll figure it out. She wants to take care of him and do the right thing. And she needed to be honest with him [in that moment] and be like, “Here’s where I was. Here’s what I was doing. And here’s why I was doing it.” In a way, that emotional need almost [trumps] the actual physical realities of money.

TVLINE | Max, I never saw Dylan happier than after his first kiss with Emma. What was it like to, you know, smile for the first time on the show?
THIEROT | [Laughs] It was nice, because he has longed to be loved by his family. [That connection] is something that has been missing [in his life]. He had Jodi Morgan [last season], but that was just a sexual thing. [Laughs]. For him to finally have this happiness is a huge relief to him.

TVLINE | Kerry, are you committed to the Dylan-Emma relationship?
EHRIN | We feel that they are a real match, emotionally. How that plays out, I can’t say.

TVLINE | Nestor, Alex murdering Bob Paris upped the stakes considerably. It showed that he’s willing to kill for Norma.
CARBONELL | This is a different line to cross, even for him. Bob wasn’t a moral person, but Alex had deep roots with him. It was not an easy kill. It also wasn’t about anything other then [protecting] Norman from being incrarcerated. And to pare it down even more, it’s strictly about [his] love [for Norma].

TVLINE | It seemed like perhaps he was on the fence about pulling the trigger until Bob played the father card.
CARBONELL | It’s true…. [Alex is] absolutely turning into what he feared most, which is his father.

TVLINE | Getting back to the episode’s final scene, it felt like that intimate Norman/”Norma” moment was building to a kiss. Was that ever considered?
EHRIN | No. It’s definitely [on our minds] how to do it and when and why, but we weren’t planning it there.

TVLINE |  Vera and Freddie, any weirdness knowing there’s more of that coming?
FARMIGA | [Laughs, nervously] I don’t think so. I’d like to say… no? [Laughs] I also know that Freddie likes to push the envelope in this arena.
HIGHMORE | [Laughs] Like the kiss at the end of Season 2. I’m sure they will continue to get closer. I don’t know why, but those scenes always make me giggle. It’s fun. It’s not weird.
FARMIGA | The way we attack those scenes is with sheer earnestness. It’s funny what comes across [to viewers] and the judgement that’s put on it. In those moments, it’s just sheer affection between a mother and son. That’s how I’m playing it.

TVLINE | I loved the use of The Ronettes’ “Be My Baby” at the end.
EHRIN | That idea came out of post-[production] from our editing assistant Ryan. It’s a special song to me because it was in an episode of Moonlighting, which was my first job. And it was in one of my episodes. It’s such a romantic song. And I loved how it tied into the romance and the happiness of the situation. Norman can be happy with his Fake Norma. THAT’S Psycho.