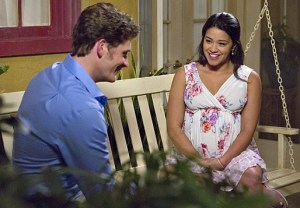 Life is about to change big time for Jane the Virgin‘s titular heroine in Monday’s season finale (The CW, 9/8c) — hello, motherhood! — but perhaps there’s some stability to be found in a potential reunion with her ex-fiancé?

After reigniting the spark in last Monday’s episode, Team Michael is back in the game — but so is Rafael!

So who will win Jane’s heart? Is Michael ready to be a papa to another man’s child? Are we crazy to kinda, sorta be ‘shipping Petra/Michael? And what twists are in store for the finale? We asked star Brett Dier those burning questions and more.

TVLINE | Coming off the last episode, Team Michael is having a moment. How are his prospects looking in the finale?
Michael, obviously, still wants to be with Jane, but he also has total respect for whatever she wants. So I feel like they’re building a good friendship right now. I can’t tell you if it [grows into] more. But I do know they’re on better terms, that’s for sure. They’re doing well. They’re trying to patch up the awkwardness that was there.

TVLINE | In terms of the Michael vs. Rafael debate, what do you think Michael has going for him?
They’re both great guys. They both have flaws and have done stuff that isn’t the best, but that’s what people do. No one’s perfect. Michael’s been patient with Jane, with the whole virginity thing. He was with her for two years. Most guys would call it quits after that. [Laughs] But he’s in love with her, so he kept that going. He works hard. He understands Jane, the history, the whole family. He has a relationship with everybody, especially Rogelio. [Laughs] So there’s a lot of history and familiarity. Especially with going through something like having a child, it’s good to have familiarity and a base, and Michael’s a good base for Jane.

TVLINE | You can’t count out Rafael, though. We see in the preview that he wants Jane back, and at the same time, Michael makes it clear that he’s going to fight for her. How intense do things get between the two guys?
It’s pretty intense. It’s always going to be that. Whoever gets back with who, there’s always going to be this intense fight for Jane. It gets very intense, and it’s going to stay that way into Season 2. It’s never going to end. [Laughs]

TVLINE | You’re all so close off-screen. Do you wish you had more scenes with Justin [Baldoni] where you weren’t just growling at each other?
[Laughs] It is kind of fun playing the opposite of something. We are good friends in real life. I actually just had a meeting with him; we’re doing a project together, which is very top-secret. It’s going to be really epic and different. But we kind of like playing the fight with each other because it’s just more fun. 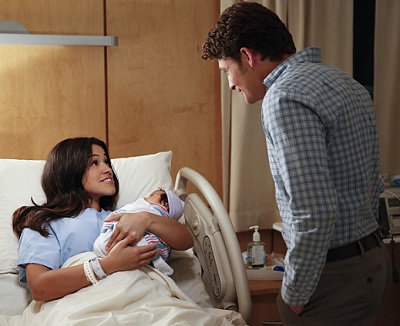 TVLINE | Wanting Jane back is one thing, but is Michael ready to be a father to a child that’s not his own?
I think that’s definitely going to be something that’s tough for Michael to do. But with the right therapy, he could do it. [Laughs] Michael cares about Jane more than he cares about himself, so I think he would like to figure out a way to make that work.

TVLINE | I saw that you favorited my “Make Michael/Petra happen” tweet. Was that an “Aww, you’re so crazy” favorite, or a “That could be interesting” favorite?
[Laughs] It thought it was cool. I thought it was funny that people are ‘shipping Michael and Petra. But who knows, right? Who knows what could happen? Are you Team Petra and Michael? 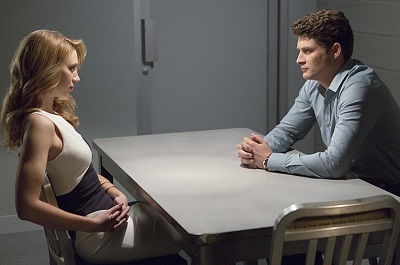 TVLINE | I like them. I think they have potential and they bring out a lot of comedy in each other.
Yeah, they definitely do. And I love working with Yael [Grobglas]. We have good throwback comedy chemistry. It’s fun.

TVLINE | Plus, it’s a soap opera, so I imagine, eventually, they have to go through all the permutations of couples.
Exactly. And it’s cool to see what other people will have scenes with Rogelio, too. Like maybe a Petra and Rogelio thing will happen? Each character is so fun to be paired with, and that’s what’s so exciting about it. Like the episode where they paired me with Luisa in the interrogation room, that was one scene, but it was so much fun.

TVLINE | Speaking of Luisa and interrogations, are we going to get more followup to the Sin Rostro storyline and Michael’s investigation?
Perhaps. [Laughs]

TVLINE | Executive producer Jennie Urman told me there’s a lot of twists, a big cliffhanger in the finale. Give us a little tease.
I think it will leave the audience with a lot of anxiety. It’s a perfect way to end the show because they’ll have to watch the second season.

TVLINE | Is there some closure at least with regards to Jane’s love life?
Not really. A little bit.