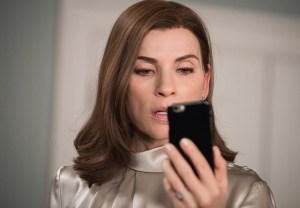 Has there ever been a doubt that The Good Wife‘s Kalinda Sharma is a disciple of The Church of Nancy Sinatra?

Her boots — polished leather, knee-high, ridiculously sexy — have always been made for walkin’. And in the Season 6 finale, that’s just what they did… to whatever enigmatic destination her wall safe of cold cash, firearms and fake IDs (c’mon, you know she’s got ’em for at least a dozen jurisdictions) allowed.

We’ve known, of course, that Kalinda’s farewell was coming (ever since Archie Panjabi announced last October her plan to exit the series). What was less certain was whether or not CBS’ brilliant legal drama would give long-time fans some much-craved resolution between Kalinda and her estranged pal Alicia — a rift prompted by the revelation Kalinda had slept with Alicia’s hubby prior to their becoming friends. That resolution also would also bring together Panjabi and series star Julianna Margulies, two women who haven’t shot a scene together in some three years. (No, last week’s barstool flashback — a two-camera affair which isolated each actress in extreme closeup — most certainly does not count.)

Well, as sure as Chum-Hum is fictional Chicago’s favorite search engine and as definitively as Elsbeth Tascioni dislikes anti-Semitic bears, showrunners Robert and Michelle King finally delivered The Great Tequila-Shots Reunion/Goodbye Extravaganza of 2015 — and it made me (as Beyoncé might say) a little drunk in love.

We’ll break down the specifics of #Kalicia in just a moment, but to be fair, that was far from the only headline coming out of the aptly titled “Wanna Partner?” (a moniker that, alas, did not turn out to foreshadow Finn Polmar in his legal briefs, giving, ahem, dictation to the Lady Florrick). Peter running for President of the United States? Louis Canning knock knock knockin’ at Alicia’s door — and pitching a business partnership? Kalinda escaping Lemond Bishop’s invitation to check out his new resort and spa (The Shallow Ditch) in scenic Cicero, IL? I grade those arcs as follows: B(b-b-b-b-b-but can you survive a primary if you did hard time in the clink?); B(et against them in court at your own peril); and A(lcohol and Alicia are a nice fit).

Let’s break down the main arcs in succinct fashion — while raising some questions about their implications for Season 7:

HUSTLE AND FLOTUS | Are you ready for President (OK, Vice President) Peter Florrick? Don’t laugh, folks — Alicia showing this kind of incredulity feels thisclose to cruel (despite the whole “slept with hookers” and “prison stint” backstories that aren’t going to play so well in a primary campaign). Turns out the Illinois Democratic Party wants its formerly disgraced/currently high-flying governor to seek an even bigger post — enter the Presidential race with the goal of being picked as Vice President — and not only does his willingness represent the culmination of every one of Eli Gold’s lifelong dreams (except maybe a second chance with Natalie Flores), it also guarantees Alicia won’t be able to shake the hilariously short-fused campaign manager from her life anytime soon. (Huzzah!)

Peter wants the approval of Alicia, Zach and Grace — but Alicia makes the sharp-eyed and flinty observation that her husband has already made the call to proceed, that he shouldn’t put it on his daughter’s head. (Grace’s “Are you still gonna pretend you’re married?” is the episode’s most blunt, flawless line of dialogue.) Even worse, that memoir of Alicia’s is merely one of Eli’s tools to rebrand the Florrick marriage and the public image of Peter’s wifey.

Still, if Alicia agrees to take the ride to D.C., it’ll mean sacrificing any shot at romantic fulfillment/an authentic personal life. I mean, think about it: If Peter polls well in Iowa and New Hampshire, the implications for our heroine will be fascinating — especially after her brief, disastrous attempt at grabbing her own piece of the political pie in the State’s Attorney showdown. Can she shut down her need for true love to fulfill her need to… serve the greater good/exert influence on a national stage/chalk up another Florrick family win? What kind of damage control would she have to perform to restore the luster to her tarnished St. Alicia halo? And — if she goes along for the POTUS ride — are there enough hours in the day for Grace to pray away the vultures who’ll zero in on the incredibly separate lives/residences maintained by the Illinois first couple? No more after-hours drinks with Finn (or anybody else) while hiding under a baseball cap if Alicia goes this route, I can tell you that much.

FIRMING THINGS UP | The case of the week involves one of Alicia’s old clients (Jacob Rickter) who manages to miraculously contact her while stuck in a secret police facility called Homan Square without having ever been booked, and questioned until they confess. (What the what?!?! Let us thank the Kings for shining light on yet another scary-type development happening in this country while the majority of us are anesthetized on Chipotle and premium cable.) Alicia turns to He Whose Bedroom Eyes Can Be Consulted for Legal Strategy/Confidence Boosting/Victorian-Style Wrist Grazing as she navigates the case from her new home office, and when he says “heck yeah!” to going into business together, they pair up on the mission (and ultimately succeed) to free their man from the clink.

Bigger than the outcome for Jacob (at least in terms of the larger Good Wife lore), though, is whether Finn will take up Alicia on her proposition from last week’s episode (that they go into business together) or any other kind of proposition (maybe even an indecent one). Alas, though, just like viewers who’ve been frustrated by the two tippy-toes forward, one leap back of their pas de deux, Finn (who’s been courting his ex-wife for the last few months) seems to be over it, too. “There’s something there — between us. And we push it. Then we say we won’t. Then we push it again. And I can’t live that way,” he explains before walking away from Alicia in a way that seems very final. It’s sad, to be sure — Finn and Alicia really did seem to have somethin’-somethin’ between ’em — but I always questioned whether Alicia could truly find love with a man whom she might not have truly come to know if not for the sudden and senseless tragedy of Will Gardner’s death. Then again, even if their love affair was probably doomed from the start, I kinda wished they’d given it the old law-school try, y’know?

Who is it at Alicia’s door at the end of the hour, then? Not Cary, as I’d hoped — but Michael J. Fox’s Louis Canning — enraged that his wife was fired as a paralegal at Lockhart-Agos-Lee — and asking “Wanna partner?” And that’s where the Kings leave us.

THIS IS WHERE KALINDA LEAVES US | Bishop’s “personal attorney” (aka henchman) Charles Lester starts poking around to figure out Kalinda’s whereabouts — trying to intimidate Alicia, Cary and Diane — but it’s the sexy investigator herself who ultimately pops up in a supermarket frozen-food aisle and tells him she’ll meet with his jailed boss (if he leaves her friends alone).

Kalinda skips her meeting with Chicago’s biggest drug kingpin (and his cronies), and instead surprises Alicia in a bar, orders some tequila shots, wonders why her old pal didn’t pass to Lester the enigmatic note we saw two weeks ago (which was Kalinda’s confession to bringing down Bishop — and in the process exonerating Alicia, Cary, et al from any culpability).

It’s a beautiful denouement to a relationship long-time fans have been missing and mourning for too long now. Alicia admits when she lost the election, she “gave up: anger, jealous, daring what people thought” — and it made her miss sitting on a barstool next to Kalinda. The typically pithy Ms. Sharma gets real, too, admitting she doesn’t like talking much, then adding her time as friends with Alicia was “the best I ever had,” then apologizing “for screwing that up.” Like the glasses of alcohol before them, though, Kalinda disappears into the night, into foggy memories, mere moments later.

Kalinda finally tells Lester she was the woman who brought Bishop down — and that the files she found implicate him, too. “What is it with all these tough-talking women?” he growls — sad about the death of “demure.” He’s so impressed, he offers to become her business partner, but instead, she slips on her shades — and slips into the daylight, never to be seen again, I suspect.

What did you think of The Good Wife‘s Season 6 finale? Were you satisfied with the Kalinda-Alicia resolution? How about Alicia and Finn? And Peter as Veep? Take our poll below, then expand on your thoughts in the comments!