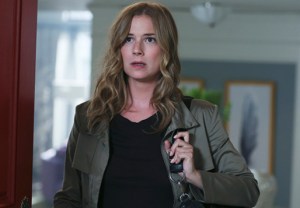 The last episode of ABC’s Revenge is just 34 hours away (Sunday, 10/9c), and while we’ve already spoiled you rotten with scoop from the finale, we’ve still got a few more teasers to share on the eve of Amanda’s big goodbye.

Let’s start with the bad news: You know that quick shot of Jack in the hospital bed in the finale promo? Showrunner Sunil Nayar tells TVLine we have every right to be worried about him.

“We called the finale ‘Two Graves,’ not just because it’s the Confucius quote that kicked the whole thing off,” Nayar explains, “but also because there will be two people in two graves by the end of the episode.”

OK, now that we’ve gotten that out of the way, scroll down for more scoop (some of which is actually hopeful. I swear.)

SEXY TIME FOR #JAMANDA | “That’s been an inevitability, the two of them coming together,” Nayar admits. “It’s a lovely moment, but there’s still something so dark about the circumstances in which these things happen. It’s the scene you’ve been waiting for, but it’s not going to happen the way you expect it to.” (Honestly, I don’t care why they’re doing it, I’m just glad it’s happening.)

DAVID’S LAST STAND | Though Nayar won’t confirm whether or not Papa Clarke succumbs to his illness — did you really expect him to? — he says we’ll be blown away by David’s actions in the finale. “He does a couple of things that are so dramatic and powerful, and you get a sense of what these people have become to him in the short time he’s actually gotten to be with them,” Nayar explains. “David’s story, I think, has a really powerful and poignant resolution.”

HAPPINESS FOR NOLAN? | “There’s always a chance,” Nayar concedes. “We strive to answer that question at the very end of the show. You’ll see in what turns out to be Nolan’s very last scene whether he does find happiness or not.” (Anyone else find that less than comforting?)

A SATISFYING END | Despite the fact that this wasn’t filmed as a definite series finale, Nayar says, “It will end as if you’ve finished a novel. The audience will feel that they’ve read the last page and closed the book. You could think, ‘Now they can start writing a new novel,’ but the audience should feel as though we’ve finished telling the story — not as if they’re missing out on a thing that’s going to happen.”

Revenge-rs, how do you hope it all ends? Drop a comment with your thoughts below.