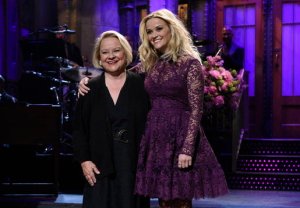 Indeed, after the so-so box-office showing of her new comedy Hot Pursuit and the misfortune of hosting a Saturday Night Live episode with a painfully high percentage of unenthusiastically conceived/written/executed sketches, homemade waffles and fresh-squeezed OJ may be the only way the Oscar-winning actress salvages the weekend.

But enough about the barely weres and never-wills: Let’s recap the week’s best and worst:

BEST: WHISKERS R WE
Witherspoon delivered her lines with gusto playing an overeager love interest for Kate McKinnon’s recurring cat-adoption advocate. As always, though, it was the bizarrely specific descriptions of the felines up for grabs that set this one apart from the pack. I’m not sure which kitten scares me more: cult-friendly Skittles, who’ll “make you sever all ties with your family” or Peanut, to whom five percent of people have a deadly allergy.

BEST: TWO GIRLS YOU WISH YOU HADN’T STARTED A CONVERSATION WITH AT A PARTY
Witherspoon joined Cecily Strong’s always-welcome, Malaprop-dropping, language-mangling chica — and took a text from “Tiger Woods” smack in the middle of the proceedings. For once, I thought this bit could’ve benefitted from an extra minute or two of shenanigans, but it’s hard to beat, “I’m voting for the Sudan. Oh, but I’m sure Hillary Clinton is starving children too!” or the ladies’ new twist on Rock, Paper, Scissors.

WORST: WATER PARK
Kyle Mooney (ugh) and Beck Bennett played awkward loner lifeguards trying to win over Witherspoon’s fellow employee by rubbing SPF on her shoulders. That was it. No real punchlines and no surprises whatsoever. This utter mess — which was too short to build any meaningful momentum, and yet still too long to endure even another 10 seconds — has to rank as one of SNL‘s worst over the soon-to-conclude Season 40.

WORST: “WILLIE” ON “WEEKEND UPDATE”
Wait, surely there weren’t people outside of Kenan Thompson and his inner circle who wanted the SNL vet to bring back his painfully optimistic “Willie,” a man who smiles through tales of being pelted with batteries and getting robbed in a high-school parking lot. File this under: The show’s writing staff is soooo ready for a summer vacay.

Your turn. What did you think of Reese Witherspoon’s SNL host gig? Take our poll below, then sound off in the comments! (We’ll post video as soon as it’s available on Sunday a.m.)