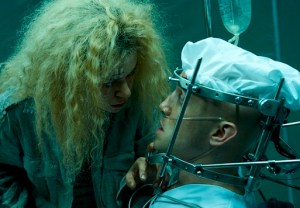 Meanwhile, Sarah got one step closer to the original Leda DNA, and Alison’s suburban drug venture led to a blast from the past.

Let’s review the hour’s biggest reveals and suss out what they mean for the seestras’ future.

WHAT’S IN A HEAD | After Helena purposefully hurts herself so she will get transferred to the infirmary and can find an escape route, she discovers a horrifying sight at Castor’s home base: Mother is doing experiments on her own “son,” slicing open his head to expose his brains. Helena mercifully puts the clone out of his misery even though it means sacrificing her getaway plan. Prognosis: Popuk says, “Get the hell out of there!” Clearly, Castor is willing to do whatever it takes to fix the male clones’ neurological defect, including cutting into their own. So what’s stopping them from doing the same to Helena (after the baby is born)?

IT’S ALL IN THE DNA | Sarah discovers that Johanssen successfully made a clone, which his wife carried. Unfortunately, the child died, but you can still get DNA from the remains, Mark points out. So, as they’re digging up the biology, Rudy arrives to swipe it and take out Sarah. As Rudy’s superior officer, Mark ends up saving Sarah’s life by ordering him to stand down — or does he?! “We don’t leave loose ends,” Rudy notes as they stand over her body. “No, we don’t,” his brother replies. 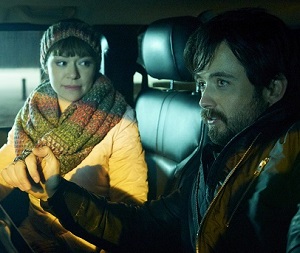 THE PAST IS PRESENT | Donnie worries that he’s being followed by the police, so Alison suggests they move their goods in time to make it back for the kids’ swim practice. “Oh my God, is everyone else’s life this chaotic?” Oh, Donnie. You are the biggest drama queen on this show, not Alison. (Nice cut from Sarah excruciatingly trying to extract a bullet from Mark’s leg to Donnie complaining about carrying heavy boxes.) It turns out that Ramon’s drugs were on consignment and now Alison and Donnie owe his dealer a lot of money. Luckily for them, he happens to be Alison’s high school ex-boyfriend Jason Kellerman (played by Shameless‘ Justin Chatwin)! She dumped him, for the record. But he’s not bitter. In fact, it feels like he wouldn’t mind it if Donnie was out of the picture. But back to business… Alison promises to double what Ramon was bringing in, and Jason praises her “soaps” cover.

LITTLE GIRL LOST | Gracie’s mom takes her to yet another creepy Prolethean compound with a patriarch. While there, she loses the child, which Bonnie is none too happy about. “Our legacy, and you lost it,” she says with venom. “You ruined the last chance for this family. You will not be welcome back here.” Honestly, I’m ready for all the Proletheans to disappear. There are already enough foes this season.

Orphan Black fans, what did you think of the episode? Have the Proletheans overstayed their welcome? Did the Alison-ex twist surprise you?