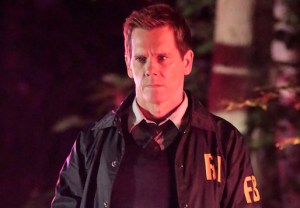 The Following has been marked for death: Fox has cancelled the Kevin Bacon-fronted serial thriller after three seasons, TVLine has learned. The show’s two-hour series finale is slated to air on May 18.

The Following opened strong in January 2013, drawing north of 10 million viewers and then averaging 8 mil (with a 2.6 demo rating) across its freshman run. For Season 2, it averaged 5.2 mi and a 1.8 (yet scored an early pick-up). Season 3 opened with 4.8 mil/1.6, improving on Sleepy Hollow’s finale in the time slot, but at last tally the serial killer drama mustered barely 3 mil and a 1.1, the lowest-rated non-CW program on Monday night.

Bummed there won’t be a Season 4? Or was it time for The Following to get killed off Fox’s schedule? Hit the comments!