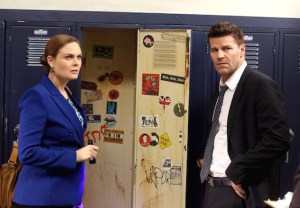 Showrunner Stephen Nathan will take a brief step back from his Bones duties to work on his other Fox projects, but per the network, he hopes to rejoin the show later in the season. Showrunners Jonathan Collier and Michael Peterson will remain on board for the duration.

TVLine’s 2015 Renewal Scorecard has been updated to reflect the news.

Fans, are you relieved to know the crime-solving duo will be back in action this fall? Drop a comment with your hopes for the final episodes of Season 10 below.