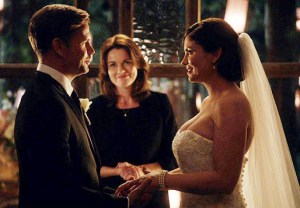 Thursday’s Vampire Diaries wedding had it all: something old (Jo’s dad), something new (Damon’s fresh outlook), something borrowed (Liv’s dress, probably) and something blue (poor Caroline). Oh, and let’s not forget Kai’s bonus gift for the bride: something awful.

Seriously, if you thought Jo and Alaric’s nuptials would go off without a hitch, you’re clearly new to this show. In the episode’s final moments, just as Jo was prepared to speak her vows to the man she loves, the least-invited person ever decided to crash the wedding and stab the blushing bride. Sure, I’ve grown to love Kai since we first met him back in 1994, but I would have been happy with a simple post card.

Unfortunately, Jo wasn’t the only mortal seriously injured in the onslaught; Elena also took a nasty tumble, and by the looks of that promo for next week’s season finale — what’s this about saying goodbye before it’s too late?! — I wouldn’t expect to see her back on her feet at the top of Nina Dobrev’s final hour. Or even at the bottom.

Now, it’s time to hit the “rewind” button and discuss what happened before everything fell to pieces: 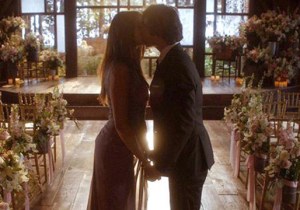 DAMON’S PROMISE | In an attempt to shake Damon of his thirst for the cure, Stefan took his brother to one of his old start-over houses, where he used his vision-inducing power — the only power he employs even less than his flight these days — to give Damon a horrifying glimpse into his future as a sad, lonely, pathetic… human. (Ugh, I can barely write that word without puking onto my keyboard.) But did it work? In the words of Ms. Mercedes Jones, heeeeellll to the no.

After catching a glimpse of an adorable elderly couple, Damon realized just how badly he wants to grow old with Elena, a revelation that led to one of the most moving speeches in Vampire Diaries history: “I’ve been a vampire for a long time,” he told her, standing appropriately at the altar before the ceremony. “It’s been a blast, but I’d give it up in a second to be your husband, your partner, to have your kids.” Naturally, the only appropriate way to follow this up was with a literal roll in the hay, so I can’t blame either one of them for indulging. (Also, kudos to them both for managing to brush out their sex hair in time to walk down the aisle.) 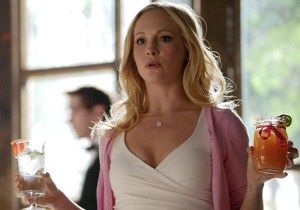 PUMPING THE BRAKES | Now, for a considerably less successful love story: Caroline and Stefan sat down for their first real talk since she regained her humanity, and while he appeared all gung-ho about their future as a couple (“That’s what falling for somebody is; it’s being vulnerable, giving up control”), Caroline surprised us all by rebuffing his advances and choosing herself. “Control is all I have,” she told him. “I don’t think I can give that up.” Personally, I think Caroline could stand to go easier on herself and Stefan; people react to grief in different ways, and blaming her actions on this budding relationship is only going to deny them both more happiness in the long run. That ain’t what Sheriff Forbes wanted!

TVD fans, your thoughts on that final twist? Do you think Elena will survive? And what about Jolaric’s kiddies? Drop a comment with your hopes and fears for next week’s finale below.