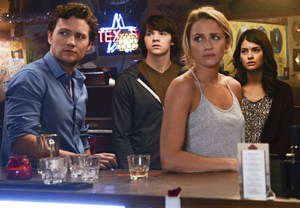 The CW is shooting The Messengers.

The freshman drama, which followed a group of individuals on a quest to find the Devil and prevent the Apocalypse, will not return for a second season, TVLine has learned.

The Messengers premiered April 17 to 1.2 million viewers and a 0.3 rating, down a tenth from Hart of Dixie‘s final Friday premiere and finale. TVLine readers gave the supernatural drama a C+ average.

BuzzFeed was the first to report The Messengers‘ cancellation.

Fans, are you bummed about this? What do you hope to see from the rest of the (only) season? Drop a comment with your thoughts below.