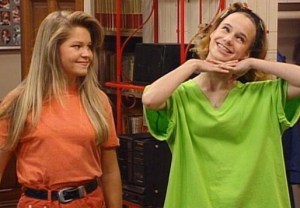 In addition to new details about the present-day Tanners — including that DJ’s late husband was a fireman, apparently — TVLine can also reveal the three younger characters (aka the new DJ, Stephanie and Michelle) being introduced in Netflix’s Full House continuation series, based on some fresh casting intel.

* Jesse Daniel (aka “JD”) is DJ’s 12/13-year-old son, described as a “ladies’ man” with three girlfriends. He worshiped his dad and is having a difficult time coping with the loss, which results in him acting out. DJ tries to make him a better person — he allegedly resents her for “constantly pushing him to read, do charity work and generally de-shallow” — but it doesn’t sound like her plan is working. (Bonus scoop: JD is a musician and rides bikes, just like his [Great] Uncle Jesse.)

* Max is (presumably DJ’s) 6/7-year-old son who seems to take after “Grandpa Danny” in that he’s got O.C.D. like whoa. “He takes tremendous pride in keeping his room tidy, his shirt tucked in and has already mastered the art of hospital corners.” A tech geek who also lacks rhythm, Max looks up to his older brother and is constantly seeking his approval.

* Ramona is (presumably Kimmy’s) 12/13-year-old daughter. Though she’s bi-racial, Ramona fully embraces her Latina heritage, and considers living with the “white-bread Tanners” to be “totally lame.” She’s described as being smart, but not into school. Instead, her interests include: “boys, fashion, being cool, social media and taking pics every second of every day.” (Sounds a lot like a 2015 version of Miz Gibbler… you know, minus the whole “smart” thing.)

Your thoughts on DJ and Kimmy’s progeny? Drop ’em in a comment below.