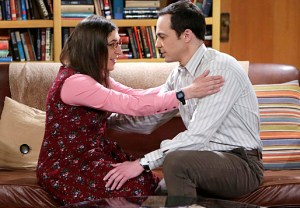 Will Sheldon and Amy say “I do” before Leonard and Penny?

Thursday’s Big Bang Theory finale pondered that very question with a gasp-worthy cliffhanger that left the longtime couple dancing around a potential breakup at the end of a disconcerting Skype call, followed by Sheldon pulling out an engagement ring! Meanwhile, the happiest day of Leonard and Penny’s life was interrupted by an unexpected confession.

Despite his admiration for The Flash, a superhero known for supersonic speed, Sheldon has never been in any rush to advance his relationship with Amy beyond the occasional kiss and the exchange of “I love you”s. (And speaking of The Flash, he’s still unsure if The CW’s fresh take will amount to a worthwhile viewing experience.) In “The Commitment Determination,” their future as a twosome looked bleak as Amy’s patience finally plateaued after years of waiting for something more.

On the Leonard and Penny front, the time finally came for them to start making some real decisions in regards to their upcoming wedding. After Sheldon called them out for going a year without making arrangements, the on-again/off-again couple decided there was nothing stopping them from marrying tonight. Upon their drive to Nevada, the duo grew unsure of an elopement, and Leonard grew weary of a secret he has kept from Penny: While off on his North Sea expedition, he engaged in a drunken make-out sesh with a random co-worker. Penny wasn’t happy about it, but it wasn’t enough to call off the wedding, which never actually took place before the episode came to a close.

As Sheldon and Amy and Leonard and Penny pondered their futures, Raj contemplated ending things with Emily, fearful of her twisted side. And though he intended on breaking things off upon their sexy-time trip to a graveyard, he instead told her he loved her out of fear of being alone. Meanwhile, love wasn’t in the air for Stuart, whom Howard and Bernadette have grown tired of as an inadvertently acquired roommate. Unfortunately, the couple were forced to put the kibosh on kicking him out when the perpetual sad-sack got a call from his dad wishing him a happy birthday. (Tough break!)

What did you think of The Big Bang Theory finale? And which couple will be first to get hitched? Hit the comments to share your hypothesis, then grade the episode in our poll!