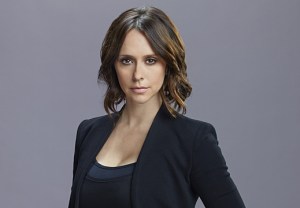 Hewitt’s exit was flagged by the close of Wednesday night’s Season 11 finale, when Kate Callahan — on the heels of a near-tragedy involving her niece Meg — tendered her resignation to Hotch, explaining that just as she did when she inherited custody of Meg, she wanted to take some time off to focus on her imminent firstborn.

Criminal Minds showrunner Erica Messer confirmed Hewitt’s exit to EW.com, saying that Callahan’s decision very directly mirrored the actress’ own, that Hewitt wanted time off to focus on her second pregnancy/child, due in July.

“There was an opportunity there to write towards the truth,” Messer said of art imitating life. “Jennifer wanted to be able to give this second baby everything she gave her first, and that’s taking time off to be a full-time mom.”

Messer said the door is “definitely open” for Hewitt to reprise her role as Kate as desired/needed. As for filling the BAU vacancy, Messer indicated the series might go with a “revolving door” approach, before settling in on a new series regular. “This might be a good opportunity to bring in a fun guest star for a while,” she aid, “and maybe shake it up a little bit.”