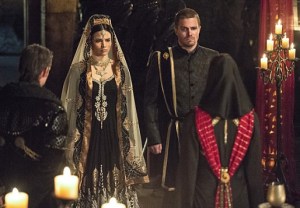 Wednesday’s Arrow (The CW, 8/7c) brings with it the nuptials of Oliver — excuse us, Al Sah-him — and Nyssa, but the specter of that dreaded union will be the least of everyone’s worries by the time the crazy cliffhanger rolls around. Let’s just say the seven-day wait until next week’s season finale will be torturous.

Having screened the penultimate episode, “This Is Your Sword,” we’re divulging seven teasers that should ensure you get to the proverbial church on time:

* Holy, epic fight sequence! When Diggle, Felicity, Laurel, Malcolm and Tatsu land in Nanda Parbat with the hopes of saving their city from the Alpha Omega virus, a battle breaks out against The League (with a last-minute assist from Atom) that might be the show’s lengthiest and most impressive to date. 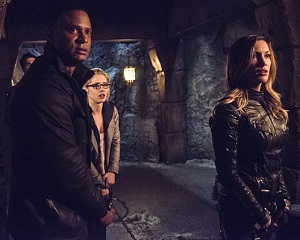 * Diggle’s got some serious anger when it comes to Oliver, and it doesn’t seem like his issues with what his friend did are going away anytime soon.

* Tatsu convinces Felicity to fight for Oliver, but it might be too late seeing as how she finds out — from Oliver himself! — that he’s getting hitched to Nyssa. Tatsu also reveals to Felicity something Oliver confessed to her while she was helping him heal after the fall.

* Thea’s trip to see Roy, who now goes by the name Jason and works at an auto shop, leads to a scenario that will definitely evoke excitement.

* Nyssa’s not going down the aisle without a fight. Atta girl!

* A major business move is made.

* Malcolm delivers not one, but two of the episode’s biggest twists.