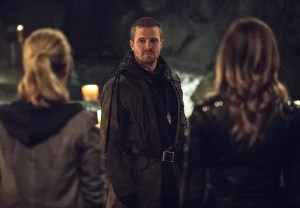 “Cloudy with a chance of death” is the best way to describe Arrow‘s penultimate episode of the season. But by the end of the hour, the fate of one character is crystal clear.

At the beginning of Wednesday’s episode, as suspected, we learn that Oliver has been putting on an act for Ra’s, but — twist! — he’s actually in cahoots with Malcolm! Alas, Merlyn points out to Oliver that earning back his friends’ help might be difficult since he did too convincing of a job as Al Sah-him. So Oliver sends someone they will trust: Tatsu, who warns Team Arrow that their home is in great danger. Diggle and Laurel are on board to save Starling City, but Felicity — “There is no him left,” she declares sadly — needs some more convincing to fight for Oliver. (Finding out that his last thought before the fall was of her seems to do the trick.)

But when the gang arrives in Nanda Parbat, they get a far-from-friendly welcome as the League immediately surrounds them. (Side note: The trip marks Malcolm’s third(!) flight between Starling and Nanda Parbat in this hour alone.) An epic battle breaks out as Felicity tries to hack into the plane that will transport the virus, and there’s a lot to love about the sequence: Malcolm’s saving Laurel’s life and her making it clear that she won’t reciprocate; Felicity’s thinking she took out an assassin with her tablet; Ray’s flashy last-minute arrival in the sky; and of course, Tatsu and Maseo’s emotional sword fight. “Thank you for releasing me from my prison,” he says after she delivers a deadly stabbing.

Things get worse as the group is captured and chained up. All the while, Oliver continues to play his part, spilling the news of his upcoming nuptials to Nyssa in front of everyone, including a shocked Felicity. Even when he does eventually drop the mask with Diggle, tension remains. “You lost my trust. You lost my respect,” Dig tells his former friend.

Meanwhile, weaselly Malcolm tries to save his own skin by revealing to Ra’s that Oliver has been faking it. In an apparent effort to prove his allegiance, Oliver lets Ra’s release the Alpha Omega virus on a prison cell… the one containing Felicity, Diggle, Laurel, Ray and Malcolm! (All this after he asked them to trust him!) As they slowly pass out, Al Sah-him marries a reluctant Nyssa, who makes a desperate, failed attempt to attack Oliver with a concealed knife before their union is sealed.

A NEW LIFE | Thea tracks down Roy, err, Jason, who is living a normal, boring life, working at an auto shop and not fighting crime. She presents him with his old costume and suggests that now that people think he’s the Arrow, they don’t have to know that he’s Arsenal, too. After hitting the sheets, Roy calls Thea out on her go-to move when things get tough. “I’m not running away. I’m running to you,” she insists. But Roy wants more for Thea, who wakes up alone to a gift (the Arsenal jacket) and a note (“I always thought red was more your color anyway”) from her ex. Raise your hand if you’re totally on board for this!

CORPORATE CHANGE | Before leaving for Nanda Parbat, Ray has Felicity blindly sign some paperwork, which turns out to be for transfer of ownership. (You’re really not going to read it first, Felicity?!)

WAY BACK WHEN | As for this week’s action-interrupting flashbacks, I understand why they are a necessary part of Arrow‘s structure; what happened to Oliver over the five years he was away and the people he met along the way are a big part of his character journey. (Imagine meeting Slade in Starling City without having first gotten all that history of his time with Oliver on the island.) But this season, they give us information we could have easily gathered in the present. At the very least, this week’s glimpses — summed up: Maseo wants the cure to save his son, but one doesn’t exist — could have been condensed into a single flashback sequence toward the beginning of the episode.

Arrow fans, what did you think of the hour? Did Oliver really let Ra’s unleash the virus on his friends, or did he switch it with some sleepy-time potion? Could Malcolm’s millionth betrayal be a part of a grander plan by Oliver? Sound off in the comments!