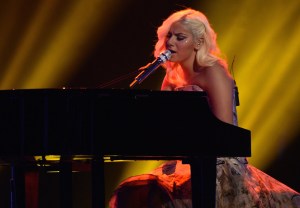 It’s hard to say anything too harsh about an American Idol finalist immediately after experiencing his/her “Hometown Visit” package.

Misty-eyed mamas. Weeping dads. The contestants themselves embracing Fox affiliate meteorologists, kissing schoolkids and choking back their emotions when they realize they’re officially stars (or something pretty damn close).

Lucky for me, Wednesday’s Top 4 performance night — featuring one painful elimination — was (despite the absence of Quentin Alexander and Joey Cook) about as solid a night of performances as we’ve had in Season 14… no small task considering the remaining vocalists were all suffering some combination of jet lag/sleep loss/anxiety/terrifying proximity to Scott Borchetta’s Goatee of Doom (TM pending).

Still, since we all knew the end-of-episode drop-kick (based on last week’s votes) was bound to be as painful as it was unpredictable, it was hard not to read the homemade contestant banners and overbearing Harry Connick Jr. jokes as if they were tea leaves. Interestingly, the judges declared this week’s Round 1 (Scott’s choice) as a win for Jax, Round 2 (Hometown Dedication) in favor of Rayvon and Round 3 (Judges’ Pick) squarely in Nick’s corner. Did that mean Clark would be axed? Surely, Nick singing in the 12th and final slot meant he was safe, yes?

I’ll get to the ouster in a moment, but first let me hand out letter grades for all 12 performances:

Rayvon Owen – Jason Derulo’s “Want to Want Me” — Grade: B | Rayvon’s falsetto sounded smooth and effortless (except for that string of extra-high notes where he went a little squeaky) on a track that Jordin Sparks’ Icky Ex (and soon-to-be So You Think You Can Dance judge) Derulo performed on Idol just a few weeks back. Problem was, though, Rayvon’s vague smile and tepid “Whoos!” extinguished any sexual fire on a song that’s supposed to be all about seduction and desire. So while a surface listen might leave you saying “Ooh, pretty!” a deeper reading unearthed an antiseptic approach where something dirtier was needed.

Clark Beckham – U2’s “Beautiful Day” — Grade: C- | Clark hit a higher percentage of notes on U2’s sunny anthem than Lee DeWyze did back in the Season 9 performance finale, but his cover was still pretty painful, like having a Q-Tip jammed hard into your eardrum (whereas Lee’s actually went a step further and punctured it). Beyond the flat notes in the opening verse, the repeated (unfortunate) cracks in his vocal, the inability to stay in the pocket and the off-kilter final glory note, though, Clark was also giving off an awkward, disconnected vibe — as if he was trying to tell his sometimes nemesis and possibly future boss Mr. Borchetta, “Dude, I’m not really a rocker!” It’s OK, Clark, we believe you! 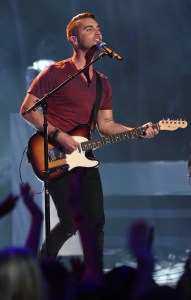 Nick Fradiani – Patti Smith’s “Because the Night” — Grade: B+ | In the Aesop’s Fables version of Idol, Nick would definitely be playing the role of the hare. Think about it: His “slow and steady” philosophy made him look like a mid-pack player for the first half of the season, but by staying in his lane (and staying consistently in tune) he’s become a strong possibility to win the whole dang race. And despite his lack of Moment-Moments (TM, Mariah Carey), I can’t be that upset about it. Sure, Nick didn’t really make any changes to the melody or tempo of the classic rock anthem Scott chose for him, but unlike Clark and Rayvon before him, Nick brought to life the yearning, burning energy of the words coming out of his mouth. I’d have liked a gentler approach to the verse — which would’ve made the choruses even more explosive — but the heather red v-neck almost made up for it.

Jax – The Who’s “My Generation” — Grade: A- | Hat tip to The Man Who Finally (Mercifully) Replaced Randy Jackson as Mentor (sorry for taking you back to that dark time in Idol history): I wouldn’t have put “My Generation” in my top 500 (or probably even 1,000) song suggestions for Jax — but it actually turned out to be kinda perfect for her. Girlfriend got a chance to engage the crowd, jam out with the Idol band drummer, drop to her knees and rock a ridiculously shredded t-shirt. But unlike some of her prior attempts to grunge it up, this time around Jax’s vocals were tighter than Keith Urban’s t-shirts. What I dig about Jax is she seems to have some real musical knowledge — from classic rock all the way through Taylor Swift — and she’s really learned how (and when) to bring some snarl and sass to her performances. Knowing that the last impression voters got of Jax also happened to be her weakest vocal, I’m a little worried she could be at risk next week. But just like the Jersey teen can’t seem to live without her painted-on “X,” I can’t really fathom a finale without her.

Nick Fradiani – Andy Grammer’s “Back Home” — Grade: A- | Confession: I was unfamiliar with “Back Home” ’til I saw the leaked song spoilers for Top 4 night and looked it up on YouTube. Still, Nick’s total immersion in the ditty — and his clear elation as he ripped into the chorus — gave me glimpses of the post-show success he could be, especially when paired with footage of his emotional hometown visit. And maybe that’s because on a season where too many song choices have felt like random stabs at grabbing something (anything!) off a pre-approved list of 25 or 30 tracks, Nick (the guy who chose to stay with his band in Connecticut rather than chase a dream in L.A. or N.Y.) zeroed in on a number that sounded like what he might write himself. Yeah, exec producer Per Blankens cheated us on hearing any extended snippets of the original tracks played at his hometown concert with his band Beach Avenue, but raging optimist that I am, I’ll just hope he’ll get to break one out next week. (Oh, who am I kidding: They’re gonna make him sing “I Don’t Want to Be,” aren’t they?)

Clark Beckham – Otis Redding’s “(Sittin’ on) The Dock of the Bay” — Grade: B+ | Clark was wise to choose the kind of old-school soul jam that made him a front-runner right from the start of the Season 14 voting rounds, but the execution fell just a tiny bit short of past glories like “It’s a Man’s, Man’s, Man’s World” or “Sunday Morning.” To be fair, Clark rocked it out behind the piano and put some stank edge on his big notes, but there was something just a wee bit lounge-act about the arrangement (and that cheesy “moon over the water” backdrop). Plus, that final growly howl didn’t quite land — and underscored the concern that Clark’s instrument may be a little bit worn down as the competition nears its end. 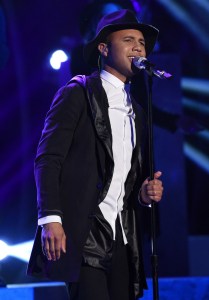 Rayvon Owen – Stevie Wonder’s “As” — Grade: A- | Harry Connick Jr. took the words right out of my brain (they hadn’t even made it to my mouth) when he noted that the “joy and physicality” of Rayvon’s “As” were the two ingredients that made it so special — and made it superior to so many of the handsome fella’s “close, but no cigar” performances of prior weeks. Not since “Jealous” on Top 24 night had we gotten to hear his buttery tone on something that wasn’t a dirge-y lament (while still being completely in tune), and while it may have been too late to count in the voting, it’s a nice reminder that Rayvon’s got more than one dimension to utilize in his post-Idol life.

Jax – Evanescence’s “My Immortal” — Grade: A- | Like Jena Irene in Season 13, most of Jax’s greatest hits have come when she’s behind the piano — and “My Immortal” ranks among the very best of ’em. I know (because I do read the TVLine comments section) that the teenager’s lilting tone is polarizing, but I appreciate that she understands the importance of dynamics, that she can convey genuine depth of emotion (and not fall off the note) when she’s applying a feathery touch as easily as when she’s bringing down the vocal hammer. Better still, Jax didn’t follow the Idol Playbook and walk away from the keyboard mid-performance: Instead, she continued to plink away at the piano, her face registering the angst behind Evanescence’s haunted ballad, leaving me holding my breath in the best possible way. 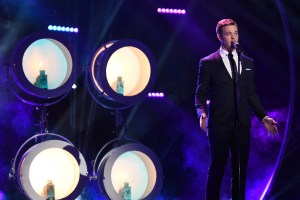 Clark Beckham – The Weeknd’s “Earned It” — Grade: B+ | Props to J.Lo for noting how crucial it was to hear Clark tackle (and conquer) a very current track — and for picking a Fifty Shades of Grey soundtrack cut that gave him a little bit of a J.T. “Suit & Tie” vibe. I agreed with Harry that the opening verse was a little vacant — but the good news is Clark’s swagger kicked in on the chorus, allowing him to master the song’s tricky cadences and nail those “Rev. Beckham yowls” his fans know and love. (Although the last couple may have gone slightly awry from a pitch standpoint.) But let me shut my pie-hole and pause here to let Clark’s most rabid fans work in some variation on “Clark, you’re perfect/ You’re always worth it/ And you deserve it.” (Oh, you know you wanted to!)

Rayvon Owen – Joe Cocker’s “You Are So Beautiful” — Grade: B | It was interesting the way that Team Rayvon reharmonized a classic love ballad with minor piano chords, but while he “made ‘You Are So Beautiful’ his own,” he also made it… kind of sleepy? OK, OK… to be fair, it was a very tender and tuneful lullaby that was pulling my eyelids downward, but I’m just not sure he fully sold me on the “Guy who’s almost worshipfully in love” intent of the lyric, y’know?

Jax – Paramore’s “Misery Business” — Grade: C | Let’s file Jax’s night under the classic adage “Two out of three ain’t bad.” But in that equation, “Misery Business” will most certainly get placed in the folder “One that got away.” Girlfriend never quite managed to keep a comfortable pace on the rapid-fire sing-speak verses, and with a dinky, Dancing With the Stars-flavored accompaniment, the choruses lacked any kind of genuine bite. Worst of all, though, the just-a-touch-too-high chorus brought out a stridency in Jax’s tone that I haven’t heard since the troubling times of “Beat It” and “Blank Space.” I’m just praying such an iffy last impression won’t make folks forget the good stuff that preceded it.

Nick Fradiani – Edwin McCain’s “I’ll Be” — Grade: B | I know it was the Judges’ Pick and not his own, but damn I really did not need the sixth rendition of “I’ll Be” over the last 14 seasons. I mean, aren’t there less generic songs the judges could’ve foisted on He Whose Teeth Make Everyone Else’s Weep With Envy? (Hey, how about “I’m So Lonesome I Could Cry”? Or “If I Could Turn Back Time”? You’re welcome if you made it all the way past the 2,000 word count of this recap, Scott Borchetta!) Nevertheless, Nick gave another fine, workmanlike effort on this one — while following Edwin McCain’s original template as exactingly as a Martha Stewart Living intern folding a fitted sheet (with video encouragement) for the boss lady. Which is to say, there wasn’t a single note or ad-lib that made Nick’s distinguishable from Edwin’s.

At the end of the two-hour installment, Ryan doled out the bad news: Rayvon was eliminated, leaving a Top 3 of Nick, Clark and Jax. Next Tuesday, one more singer will get cut at the top of hour — leaving a head-to-head showdown for the May 13 confetti shower.

On that note, I turn it over to you! What did you think of Top 4 performance night? Who were your faves? Who’s at risk? And who do you feel deserves to be the Top 2? Take our poll below, then sound off in the comments!