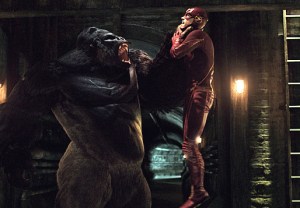 This week on The CW’s The Flash, things got hairy as Wells sicced Grodd on Central City — as if Barry didn’t have enough to deal with, now that Iris is aware of his secret identity and all!

All told, the emotional payoffs in this episode landed solidly, as Iris confronted the lying liars in her life. The Grodd sequences admittedly left me a bit cold, but maybe that’s just the immediate after taste of him being (temporarily) felled by the dumb luck of a passing train, versus any S.T.A.R. Labs ingenuity.

Here, some of the antepenultimate episode’s highlights:

IRIS SIMPLY SHOWS UP AT S.T.A.R. LABS to confront costumed Barry, who just a couple of scenes prior boldly withheld the truth from her, again. “Hi, Barry. Or should I say, The Flash?” (Or should you say: The secrets-filled S.T.A.R. Labs truly needs better security?

‘I. AM. GRODD,’ utters General Eiling, locked up in the Pipeline after being unmasked as the man behind an attempted heist. Turns out, Grodd got inside Eiling’s head, using telepathic powers that got suped-up by the particle accelerator explosion. (Why the gorilla guided him to steal gold bars… we do not know.)

‘GRODD. HATE. BANANA,’ the supersmart, supersavvy beats snarls at Joe, who offered up the snack after being captured down in the sewers. Profile much, officer?

‘YOU LIED TO ME ABOUT EVERYTHING,’ Iris points out as she and Barry continue their heated conversation from earlier. Barry, though, counters that Iris lied to him, too, when she claimed at Christmas that she didn’t share his more-than-friends feelings. Not the strongest, most proportional reasoning, but we’ll allow it. (Barry has a big gorilla to chase down and all.)

EOBARD DROPS MANY TRUTH BOMBS about the Thawne family line and Eddie’s measly, all-but-forgotten place in it. Not only does he not turn into a “captain of industry” or the like, but his cop career is uneventful “and you don’t even get the girl,” Eddie’s captor taunts, showing off Iris’ 2024 newspaper byline.

THE FLASH’S SUPERSONIC PUNCH lands with a whimper, when Grodd intercepts the jab and proceeds to toss Barry around like a rag doll. Good thing that second train happened to randomly come by a few minutes later, just as Grodd was leaping at Barry!

FAMILY TIES ARE RESTORED when Iris visits her father in the hospital, where he is nursing several ribs broken by Grodd. As an emotional Joe explains that he kept the secrets he did out of great love for his little girl, she sweetly counters that if he loves her so much, he must trust her with the truth from now on.

YOU WERE WITH ME EVERY SINGLE DAY of the past year, Barry professes to Iris, the very thought of her buoying him through this wild and crazy time, even if she didn’t realize it — a fact crystalized by her ability to talk him out of his Grodd-induced stupor in the sewers. As for Iris’ true feelings for him…? Let’s talk about that after Eddie is found, she indicates.

‘ACTUALLY, THE FOUR OF US,’ Caitlin corrects Barry as they hail their prowess as a Wells-less crimefighting team, including Iris and the reporter’s own skill set in the mix.

WELLS ‘HAS THE KEY’ — “To what?,” Eddie asks. And as the coda comes to a close, we see Wells insert the glowing cylindrical thingamabob into some hidden “keyhole” and light up a long tunnel (the particle accelerator?) that will take him… “home.”

What was your favorite part of this week’s episode?