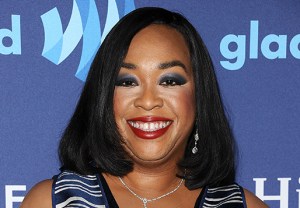 The Grey’s Anatomy/Scandal/How to Get Away With Murder producer is teaming with writer/director Dee Rees (Pariah) and FX to develop a limited series of The Warmth of Other Suns, per The Hollywood Reporter.

Based on Isabel Wilkerson’s 2010 historical study, The Warmth of Other Suns chronicles the migration of black citizens who fled the South from 1915 to 1970, told through the eyes of three denizens.

Rees will write the script, with Rhimes and Betsy Beers executive-producing under their Shondaland banner.

* History’s Vikings has added three new series regulars for Season 4: Per The Hollywood Reporter, Finnish actors Peter Franzen and Jasper Paakkonen will play King Harald Finehair and his younger brother Halfdan the Black, while Dianne Doan (Disney Channel’s upcoming Descendants) has been cast as Yidu, a young Chinese woman who will play a pivotal role.

* Conan O’Brien will take his eponymous talk show to Comic-Con International this summer, hosting from San Diego’s Spreckels Theatre for the first time in late-night history. The episodes will air Wednesday, July 8, through Saturday, July 11.

* Ed Sheeran confirmed on Twitter that he is the “super popular Grammy Award-nominated musician” appearing on Undateable‘s live episode:

randomly, i'm gonna be on #UndateableLive tonight for my dude @VDOOZER, should be fun, tune in. lots of fun to be had

* HBO will air an encore presentation of the documentary Kurt Cobain: Montage of Heck on Sunday, May 10, at 6:45 pm.