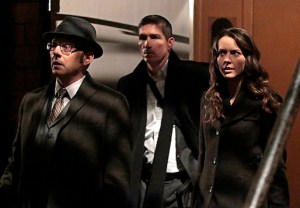 If push comes to shove, The Machine, as mighty and as omniscient as She is, can be squeezed into a piece of carry-on luggage.

That remarkable fact proved handy at the conclusion of Person of Interest‘s Season 4 finale, as Harold & Co. were led to an electrical substation in Brooklyn, where The Machine — after hiding Herself in the national’s electrical grid all this time — was chased into a corner by Samaritan. Using a briefcase full of memory cards and several bags of ice, Harold managed to download a “strand” of The Machine’s DNA, while Root and Reese (barely) fended off a barrage of baddies.

Elsewhere, Greer revealed to Control that the mysterious “correction” she was out to prevent was not some clumsy bombing of the Supreme Court but a precise and invisible elimination of “disruptors, outliers” and the “disloyal,” the “grit in the gears” that her own lack of faith helped expose. Among those snuffed or at least significantly sidelined were Elias, Dominic and Control’s henchman Grice. (Among other casualties, meanwhile, Root earlier had the pleasure of taking out steely Martine.)

Here, showrunners Greg Plageman and Jonah Nolan break down the finale’s big twists and ponder the outlook for Season 5. But first, perhaps the most pressing question at hand….

TVLINE | How did you manage to go four whole seasons before busting out Pink Floyd’s “Welcome to The Machine”?
GREG PLAGEMAN | [Laughs] We have been sitting on that one for a while. We actually tried it in another episode and were like, “No, it’s too good. We have to save it for something huge.” But that was Floyd, the real thing. We actually had to write those guys a letter to get their permission; it was pretty cool.

TVLINE | Based on how the finale ended, are we looking at a significantly different, perhaps incapacitated Machine next season?
JONAH NOLAN | Root describes it best — that if the Machine is an organism, what they have is a strand of DNA [downloaded into the briefcase]. So yeah, we’re looking next season at having to rebuild The Machine, all while not being scooped up and eliminated by “the new world order.”

TVLINE | But it won’t be just a game of “carry the football,” right? She won’t stay in the briefcase the whole season, will She?
NOLAN | No, no…. Definitely not the whole season. The idea is you’ve got that strand of DNA and you need to grow it back into The Machine, and one of the questions becomes: Will it be the same Machine when you turn it back on? 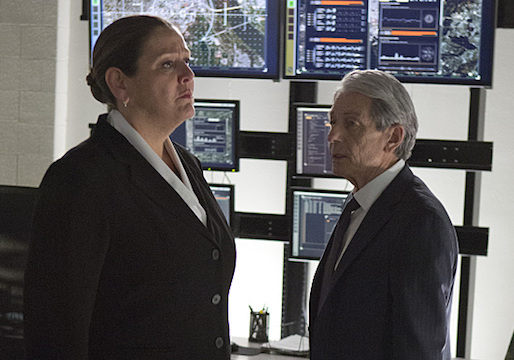 Season 5 then differ from this past season, which was about keeping The Machine safe while Samaritan was on the hunt?
PLAGEMAN | Greer said it pretty explicitly in terms of how Samaritan operates and what true power really is — the reshuffling of the deck that we saw in the finale with the “correction.” You see Samaritan removing those that it considers problematic or obstructions, and it was very lethal and insidious. I think we’re going to see how Samaritan tightens that grip, and with our Machine being under duress, how will our guys sort of reconstitute and get The Machine back in a place where they can not only continue to work with the numbers, but find a way to go up against Samaritan?

TVLINE | You startled me as much as Control with the reveal of what the “correction” truly was. I suspected the house with the bomb-making clues was some sort of trap, but….
NOLAN | That’s what we were going for. You’re thinking it’s going to be another spectacular ploy by Samaritan, but this goes back to the “insidious” thing. The question the show has been asking for an awful long time is: When that next measure of control sets in, in terms of the information “pushing back a bit,” will we even know? We’ve all settled into a place, post-Snowden, where we’ve all resigned ourselves to the idea that someone, or maybe many someones, are digging around in our personal lives. If you look at the Equation Group [hacking collective] stuff that came to light last year, it’s hard to imagine a place that the NSA isn’t at this point. But beyond that, there’s a new level of: “Am I ever going to know what they’re doing with that information? Am I ever going to know when that information has been used to subtly reorder things around me?” The frightening question we want to ask next season is: What if that measure of control was completely and totally transparent, and you had no idea that your life and those around you was being altered by a slightly higher power? That’s a terrifying dystopia, the one you can’t see. Instead, you’re just, “Things look great!”

TVLINE | Elias, though, seemed to be hanging on by a thread….
PLAGEMAN | We can neither confirm nor deny.

TVLINE | Grice?
PLAGEMAN | Yeah, he is pretty dead. But his partner is still alive somewhere out there — presumably pissed off!

TVLINE | And Martine was obviously quite dead.
PLAGEMAN | Martine is sadly extra-dead. When Root kills someone, it’s not a sort of “Eh,” ambiguous situation. You’re just dead.