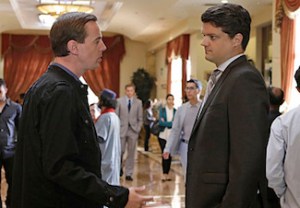 As part of TVLine’s May sweeps/finale preview coverage, NCIS showrunner Gary Glasberg revealed, “We will suffer a very significant loss at the end of the season,” in the penultimate episode. “I can’t tell you specifics, but we’ll suffer a loss, and that will emotionally drive us into the finale.”

Now, with this Tuesday’s airing of the episode “Lost Boys,” that loss has a name:

As some (or many) of you predicted, the Probationary Agent — now assigned to the Cyber Operations division — did not live to headline any eventual NCIS: Cyber spinoff. Rather, he died while on a mission with McGee in Cairo, Egypt, blown up by one of the insidious S-bombs that the team was tracking.

The loss prompted Gibbs to reflect on the agents and colleagues he has seen perish over 12 seasons, likely feeding into, as Glasberg described, “a big sort of Gibbs moment at the end of the finale,” airing next Tuesday.

Matt Jones (who now plays Mom baby daddy Baxter) began his recurring NCIS run in November 2011, with Season 9’s “Sins of the Father” episode, when Dorneget was brought in to sub for DiNozzo (who had been excused from investigating Sr.’s possible role in a murder). Later that same season, “Dorney” lobbied for a spot on Gibbs’ team… to no avail.

Jones’ return for these first two episodes of May sweeps brought his total NCIS appearances to six.

Was Dorney your pick to be the “significant loss”?