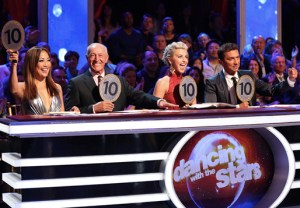 In the world of reality competition series, there’s no phrase quite as chilling as “double elimination,” is there?

And yet, as we headed into Tuesday’s Dancing With the Stars results show, I couldn’t help feeling that the booted couples were a foregone conclusion.

After all, if you watched Monday’s performance show with a critical eye (or, hey, even a non-critical one), you could easily spot the three strongest couples (Riker/Allison, Rumer/Val, Nastia/Derek/Sasha) versus the three weakest (Noah/Sharna, Chris/Witney, Robert/Kym). And even though Willow and Mark’s untimely elimination came as a shock last week, I had trouble believing that another of this season’s frontrunners would be sent packing too soon.

Then again, my years of watching reality competitions have probably yielded more incorrect predictions than correct ones… so maybe I’m not the most reliable source. Regardless, before we move to the results, here were the highlights from Monday’s performance show:

BEST OF THE NIGHT | Rumer Willis and pro Val Chmerkovskiy (Rumba) — I have a confession to make: Even though Robert Herjavec and Kym Johnson’s cutesy showmance has been a staple of their time on the show, I haven’t cared much for all the attention their will-they-won’t-they shtick has received. I much prefer the understated sexiness of Rumer and Val’s partnership, which sizzled during their traditional rumba. Not only was the pair’s choreography well-executed, but Val’s tearful apology to Rumer for “dragging the fun out of it” reminded us of the wonderful chemistry between them (without Erin Andrews begging them to kiss every week).

MOST OVERPRAISED | Chris Soules and pro Witney Carson (Contemporary) — Even though Chris isn’t the best dancer that Season 20 has to offer, he may just be the most committed to improvement, and he has seemed genuinely emotionally invested in his Dancing career (which started off as nothing more than a Bachelor/Bachelorette marketing ploy, I assume). Still, despite all his efforts, I don’t think Chris and Witney’s contemporary number deserved as much glowing praise as it received. The choreography was lovely, the music was evocative and Witney was stunning throughout the routine… and yet, Chris lacked the flexibility and lower-body strength needed to truly master the movements. (That said, he and Witney seem to truly adore and respect each other… and I can’t help but notice that the other Whitney hasn’t been in the audience lately. Hmmm.)

MOST CREATIVE | Nastia Liukin and pros Derek Hough and Sasha Farber (Trio Dance: Jive) — Regardless of the pre-performance video package — which edited Nastia to look like a petulant teenager who was told she couldn’t go to the movies with her friends — her routine with Derek and Sasha was by far the most fun and creatively structured of the evening. As Nastia slid, hopped and twirled between two different set pieces, she matched her partners’ speed and technical prowess without ever missing a beat.

WORST OF THE NIGHT | Robert Herjavec and pros Kym Johnson and Jenna Johnson (Trio Dance: Samba) — A few weeks back, I wouldn’t have been surprised to see Robert standing in the Season 20 semifinals. Sure, his dancing is a bit rough around the edges, but his willingness to try new things and overall chin-up attitude seemed like they could carry him to the Final Four, at the very least. As of late, that hasn’t been the Robert we’ve seen, especially in this frantic samba with Kym and Jenna. Robert seemed to have a good time with the dance, but his stiff upper body and out-of-sync footwork just weren’t strong enough.

OK, your turn. Do you agree with the eliminated couples? Who has the best shot at the Mirrorball Trophy now? Hit the comments with your thoughts!