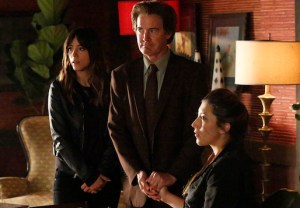 Well, that peace talk could have gone a bit better.

This week on Marvel’s Agents of S.H.I.E.L.D., ‎the ABC series revealed its latest “connections” to the MCU, a sitdown with the Inhumans took a violent turn and Bobbi fell victim to a switcheroo.

I cued up this screener less than an hour after seeing The Avengers: Age of Ultron (after seeing Age of Adaline by mistake, DON’T ASK), which made for a pretty nifty, seamless experience.

For those who didn’t get to the Cineplex yet, the main, not-too-spoillery thing you needed to “know” about Avengers 2 is that — as revealed in this episode’s opening flashback, with Coulson and Koenig — a refurbished S.H.I.E.L.D. helicarrier (aka the purpose of Theta Protocol) was “pulled out of mothballs” at a pivotal moment. Also, the emergence of the Ultron villain was a product of Tony Stark’s hubris, an experiment in AI that he dove into without consulting all of his colleagues (ergo Gonzales comparing the billionaire inventor to the dangerously secretive Coulson).

After Gordon and Raina are spied teleporting onto Gonzales’ ship, in search of its secret cargo (a “liquid” monolith of some sort of Kree origin), the “real S.H.I.E.L.D.” is on high alert, wary of Skye’s new friends. Coulson suggests a meeting between him and the Inhumans’ leader, Jiaying — who, everyone starts to learn, is Skye’s mother. But given Phil’s closeness with Skye, he is replaced by Gonzales, while Raina plots to unseat Jiaying at the negotiating table, claiming she’s had an ominous premonition of “QuinJets raining fire” on their idyllic enclave. Jiaying thwarts that power play, though, and takes the meeting with Gonzales — where she even goes so far as to turn over Cal, as a sign of good faith.

But… maybe the faith isn’t so good after all.

Gonzales starts things off on a pleasant enough note, by giving Jiaying a Chinese pendant of hers found in Whitehall’s possession, that she had wanted to one day give to Daisy. (Before Whitehall and his people literally butchered her.) Gonzales than puts the best possible spin on his wish to index the Inhuman population — in the name of S.H.I.E.L.D. being able to protect the world should anyone/thing go haywire — but Jiaying sees it as nothing more than profiling. She politely voices her grievance as she takes out a homegrown Terrigen crystal, which has traces of the Diviner metal laced inside it. She then smashes it on the table, releasing a mist which turns Gonzales into ash — as she mocks his likening of the “scars” they share. Jiaying then shoots herself twice with his gun, runs outside and claims it was at Gonzales’ hand, and declares, “This is war!”

Meanwhile, as Cal is taken into S.H.I.E.L.D. custody, he has empty vials on him — suggesting that he is hopped up on the serum that gives him his… edge.

Elsewhere in the antepenultimate hour (leading into next week’s double-episode finale):
* As everyone made their way to Afterlife, Bobbi discovered that the May she was partnered with on a QuinJet was in fact Agent 33 aka Kara, who upon besting/tying up Morse and landing them in a remote field reunited with Ward — who put another few Icers into the S.H.I.E.L.D. agent for good measure.
* After putting on the best face possible all these weeks, but given his own harrowing experience with alien weirdness, Mack resigned from S.H.I.E.L.D., explaining to Coulson that he in good consciousness cannot work for him. (I’m hoping this doesn’t stick, that with Bobbi out of commission and all hell about to break loose, Mack will be compelled to help the team out, if even for one last battle.)

What did you think of the episode “Scars”?