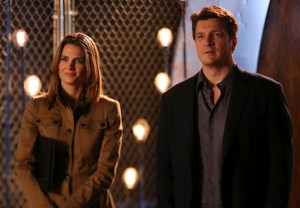 Remember that time Castle‘s Rick and Kate were told to wait a few minutes for a piece of evidence, so that Carly Rae Jepsen could perform her new single in the middle of an episode…?

Whether you loved, liked or felt otherwise about this week’s episode, that moment had to feel conspicuous — though maybe it was intended to “mirror” the musical break in a typical Saturday Night Live outing? Plus, it did give us that bit of fancy footwork from Rick and Kate.

But me, I will endeavor to remember this episode for something entirely different, namely Martha’s most emotionally resonant B-story in a while. At first, it was played for comedy, as we discover that, in readying for her first Broadway bow in years, Martha repeats her first line over and over for days prior. (Though when it was noted that Martha was premature with this habit, I feared we were heading down an Alzheimer’s road.)

But later, when Martha mysteriously aborts her tradition, she reveals to Rick the real issue at hand: her fear of braving eight performances a week, on Broadway, in today’s everything-goes-viral age. Her fear that some smart-ass with an iPhone will Periscope her performance for the purpose of online derision.

Rick, though, isn’t about to let his mother bail on her “second act.” “You’re a fighter,” he reminds the veteran thesp. “You have earned this.” And if that bit of mother-son bonding didn’t mist up your eyes, the closing scene — in which Rick read the online reviews of her debut (a la “a revelation,” “masterful” and the always trusty “amazeballs”) and then toasted her second act — had to get you there. (If you weren’t distracted by the choice of song used to underscore that tag. I never notice music, that simply isn’t my thing, so… it was an unusual pick, with vocals and stuff, right?)

The Case of the Week was forgettable — something about a Lorne Michaels-type being killed because he discovered a colleague had embezzled — yet it perhaps will (and should!) be remembered for the “Model Cop” sketch-within-the show, based as it was on Beckett/Castle. It’s not easy to ruffle Kate’s feathers, lord knows, so to see her take umbrage to the “SNT” cast member who was mimicking her “gait,” hair-flips and such, getting her impractical heels stuck in a door while kicking it down…. Highly amusing. As was Kate’s fangirling a bit over Gregory Harrison’s character, whose Hot Suspect reruns, she claimed, planted a seed for her interest in crimesolving.

What did you think of this season’s penultimate episode — and the series’ 150th —  “Dead From New York”? Ready for the finale?