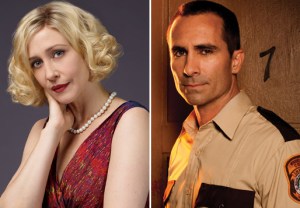 Forget Mayweather vs. Pacquiao. The real Fight of the Century went down on Monday’s Bates Motel, when Norma Bates at last took out three seasons of sexual frustration on local lawman/romantic foil Alex Romero.

Below, the almost-couple’s Method portrayers, Vera Farmiga and Nestor Carbonell — with a little help from showrunner Kerry Ehrin — take TVLine readers behind the scenes of the violent, passionate brawl, present he says/she says accounts of their injuries (or, depending on whose story you buy, lack thereof!) and reveal which of them wanted the bout to end in a knockout of a kiss.

TVLINE | Vera, you really went for it in that scene. You landed almost all of those blows.
Vera: [To Nestor] This guy, especially when the camera wasn’t on him, was literally [egging me on]. I was landing those punches.
Nestor: [Deadpans] If you wanna call them punches. I don’t know what that was. You were batting me like a little cat.
Vera: I could’ve thrown bonafide uppercuts. I actually am a boxer. And I was so tempted to. But Norma is not an experienced fighter. By the way, Nestor has the most amazing skin in the world. There was no rosacea.
Nestor: I exfoliate a lot.
Vera: It was a tough scene. You have to go for it. 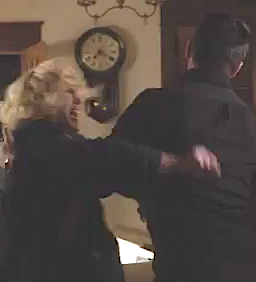 TVLINE | When was the decision made that Vera, the actress, would actually hit Nestor, the actor, versus using Hollywood smoke and mirrors and fakery.
Kerry: That’s the magic of Vera. [Laughs] She doesn’t fake that s–t.
Vera: These characters are like positively ignited ions. They repel and they attract. And you need that one-upmanship in order to create this incredibly passionate dynamic.
Nestor: You started slapping me in the beginning, but it felt like it needed to be more violent. And we talked about it and I said, “You can punch me. You can hit me in the face. Just make sure, if you do, you do it with these two knuckles because you can break my hand.”

TVLINE | Did it hurt when Vera slapped you?
Nestor: No.
Vera: [Rolls her eyes] I totally don’t buy that. It had to hurt. You’re just playing tough.
Nestor: It didn’t hurt. It was cute.
Vera: This was my hand the day after I hit him. [She pulls up a photo of her bruised hand on her iPhone; click here for an exclusive glimpse of the pic]. And I texted him and I said, “You’re telling me you don’t feel anything today?”
Nestor: I used to box back in the day. [Laughs]

TVLINE | The physical aspect aside, there were a lot of emotions coming out in that scene. When Norma was screaming, “I hate you! I hate you!” she may as well have been screaming “I love you! I love you!”
Vera: Yeah. That [outburst] was impromptu because he was like, “Give me more.”
Nestor: Norma needed a punching bag, so I was like, “Bring it” And you did. That moment needed to happen. Norma needed a release. 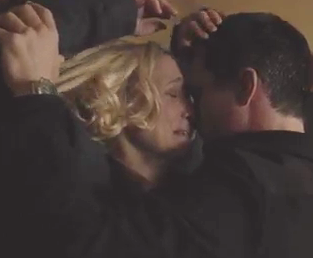 TVLINE | And then things went from violent to very intimate, although you both stopped short of actually kissing.
Vera: [To Nestor] You were [pushing ]for an actual kiss, but I was so resistant. I didn’t want to cross that line.
Nestor: But my character had to go there.
Vera: I think that breathing-in is actually more electrifying than locking lips.

TVLINE | Kerry, why didn’t they kiss?
Kerry: It didn’t seem like the right time for them.

TVLINE | It’s been three seasons!
Kerry: They still have huge trust issues. And they’re just starting to peel away a little bit of that. With two people like this, when they finally do cross that line, it’s going to be so f—ing [amazing]… it makes me cry just thinking about it.

TVLINE | The bruises that will be sustained during that scene…
Vera: [Laughs] Yes.
Nestor: We’ll be in the hospital for sure.