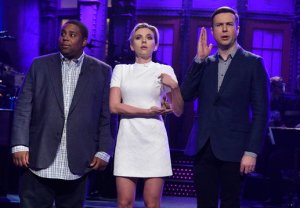 Not Ready for Primetime Players assemble!

After a two-week hiatus, Saturday Night Live returned with fourth-time host Scarlett Johansson and a near equal ratio of good-to-bad sketches ranging from a Marvel movie parody to the let’s-not-talk-about-it-ever-again museum tour.

The outing never quite took off, but it was hardly ever as rough as the “coke for breakfast and ass for dinner” world of jingle writing. For crying out loud, it accomplished what many theorized was damn near impossible by awaking a desire within us all for more movies from the writers of 27 Dresses. This of course was after blessing us with Aidy Bryant as Manny Pacquiao and Kate McKinnon as both Justin Bieber and “Take Me the Church” crooner Hozier!

So lo and behold, my picks for last night’s best and worst sketches:

BEST: BLACK WIDOW: AGE OF ME
Falling in love can be hard, but it can also be… incredible, as shown by this trailer for Marvel’s first girl superhero movie. Throwing The Avengers in a Black Widow-centric romcom may have been an easy way for SNL to address the recent controversy surrounding the blockbuster entertainment brand, but the execution of this perfectly safe parody was absolute perfection. A Pink-soundtracked pseudo-teaser featuring Thor as Black Widow’s gay best friend? Count us in!

BEST: WHITE SOX VS. ORIOLES
Back when Ferguson dominated the headlines, SNL chickened out and decided against going to air with “Morning News,” an uncomfortable but painfully funny St. Louis-based talk show sketch where the show was forced to go on despite civil unrest. This MLB broadcast sketch, embellishing on the awkwardness of the Chicago White Sox and Baltimore Orioles having to play to an empty stadium this week amidst the Freddie Gray riots, felt like a distant cousin to that Ferguson-inspired segment allegedly cut for time. “Baltimore has just been on fire this week,” and we were glad to see SNL stop ignoring the issues at hand (albeit without getting deeply political).

WORST: BLAZER
Detective John Blazer always gets his man… and his woman. The catch? His man is always black. Blazer’s also behind the tasteless ’80s cop show parody composed of his own body-cam footage. The reason why this gets deemed a worst and say, something like the never-gonna-be-a-popular-recurring-sketch “Right Side of the Bed” gets a pass, is because much like Weekend Update’s attempts at addressing race-based issues, this sketch clearly had a message behind it in development, but the execution was void of practically any substance, giving injustice a new name.

WORST (EVER?): MUSEUM TOUR
This was the first and only sketch of the night that had us pulling at our hair and clamoring for the ability to fast-forward live television. The only explanation for this stinker not getting cut at dress-rehearsal is that it was critical for the task of filling airtime. Cecily Strong and ScarJo’s random and repulsive tour-taker personas never became more than that, making us wince rather than laugh. Equally as cringeworthy was whatever the hell was going on with Taran Killam and his tour guide’s fascination with his Eric Foreman hairdo.

Your turn. What did you think of Scarlett Johansson’s SNL hosting gig? Take our poll below, then sound off in the comments!