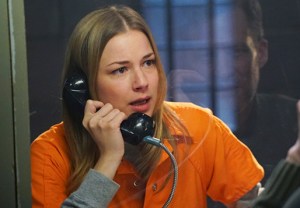 Victoria Grayson: Dead or alive? Before Sunday’s penultimate episode of Revenge, we would have bet on the former faster than you could say “infinity times infinity,” but now… not so much.

While hunting down Mason Treadwell in an attempt to clear her name, Amanda learned that he’d been hiding out in a trailer with a lady friend — and not just any lady friend; according to eyewitnesses, this lady friend looked “regal,” with a penchant for giant sunglasses. Sound familiar?

Violating the rules of her house arrest landed Amanda back in the slammer — I still refuse to believe that after all this time, Ben was the bruh to take her down — where she was joined by a very special cellmate: Miss Margaux LeMarchal! (Jack had her framed by an old friend from the police academy, or someone he connected with on LinkedIn. I forget.)

We didn’t get to hear what Margaux told her, but it must have been friggin’ crazy, because Amanda’s confidence in Victoria’s alive-ness skyrocketed. “She read up on how to fake one’s own death and get away,” she assured Ben, as if that’s something one just Googles and pulls off flawlessly.

In the end, Amanda’s “crazy” theory turned out to be completely true — which proved most unfortunate for Detective Ben, who was stabbed in the back of the neck (yay!!!) by none other than White Gold, upon finding a very-much-alive Victoria in New Jersey. (Oh, sorry, White Gold is Courtney Love’s character. I thought I’d remind you because… well, why would you remember?)

SHE ASKED HIM TO ‘STAY’! | You’ve got to respect that, even with everything else happening in her life, our girl still found time for romance. During a long-overdue conversation with Jack, she finally confessed: “I wanted you to stay, I want you to stay. I realized how badly I messed all this up.” Well, that’s an understatement… But since Victoria is alive, and considering that the series finale promo revealed she’ll come face-to-face with her accused killer, I have to imagine that the truth will set Amanda free — and into Jack’s arms.

CHAR-NOT-A-LOTTE | Charlotte also made her return to Revenge this week, though I have to admit, the lone scene felt like a missed opportunity. Rather than sending her back to the Hamptons for a potential reunion with her father and half-sister, the show gave us a quick peek into Charlotte’s life at rehab, where Louise visited to pester her about gaining access to Victoria’s hotel suite. I guess Charlotte was the first person to speculate, out loud, that Victoria had faked her death… so that’s something. Good job, Char. You will not be forgotten.

DAD NEWS | Ben might have finally gotten his just desserts tonight — I’m not the only one who couldn’t stand him, right? — but it’s like I always say: Revenge giveth, and Revenge taketh away. A tearful David informed Amanda that his cancer has spread to his brain, and that his doctor gave him (maybe) six months to live.

Revenge fans, were you surprised to see Victoria alive and well-ish? Also, are you not-so-secretly thrilled that Ben is no more? Drop a comment below with your reaction to this hour and your hopes for next week’s series(!) finale.