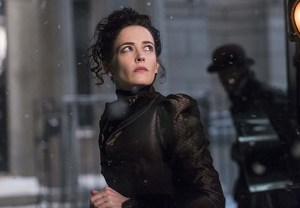 In the first season alone, your protagonist endured such (literal) hell, even Caliban’s existence looked peachy in comparison — and he’s Frankenstein’s freakin’ monster.

Let’s recap: Throughout eight episodes, Vanessa had her lifelong BFF overtaken by a demonic creature (kiiiiind of Vanessa’s fault, but hey, I’m not judging), was possessed by the Devil himself for a harrowing month and learned Sir Malcolm was only keeping her alive to get his real daughter back in the mortal world.

Perhaps she deserves a break in your second go-round, eh?

…The answer, we have since learned, is a resounding nope.

Indeed, the Showtime drama’s Season 2 premiere on Sunday found Vanessa warding off an entirely different supernatural species, while Ethan battled with his own demons, Caliban discovered the perfect job and Dr. Frankenstein brought life to his next monster.

THE WITCH IS BACK | The night after Werewolf-Ethan massacred everyone at the Mariner’s Inn, Human-Ethan urges Vanessa to take a stagecoach ride with him, in which he explains his intention to leave London — after all, he knows he’s dangerous, but he can’t exactly explain why. Moments later, though, a quartet of naked female creatures — bald, scarred and totally bloodthirsty — bursts into the coach, slaying the horses and driver in the process. They claw at Ethan and Vanessa for a few horrifying moments, but when Vanessa suddenly responds to them in their ancient tongue — verbis diablo, aka the Devil’s language — they immediately retreat.

When Malcolm returns from burying Mina (more on that in a minute), he and Vanessa consult with Ethan, Victor and Sembene about the women — witches, it turns out. Vanessa, who is even more frightened than that time Lucifer was literally inside her body, insists her battle against the witches is one she must fight alone, but the men won’t have it. Not even Ethan, whose plans to skip town are immediately replaced by plans to stay at Malcolm’s house indefinitely. 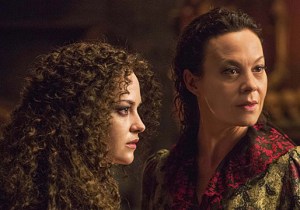 And who is it that’s leading these witches? That would be Madame Kali, who you just had to know was bad news from the moment she performed a séance in public. After bathing herself in blood, Kali chats with her coven of daughters — who are quite beautiful in human form, actually — about the plan to eliminate Vanessa and Ethan. Oh, and then she turns on the daughter who failed to kill Vanessa in her stagecoach earlier, and slits the girl’s throat without batting an eyelash. (If this isn’t the best reminder to buy a Mother’s Day gift this week, I don’t know what is.)

Later, Vanessa takes her usual spot on the bedroom floor in front of her cross, slicing open a thumb to do some ominous fingerpainting on the floor. (If I’m not mistaken, was that a lobster she drew in blood?) Madame Kali, meanwhile, intensely prays to her master at home — so intensely, in fact, that her witchy daughters appear in Vanessa’s bedroom… but when Vanessa turns around to spot them, they are gone.

Elsewhere in the sinister hour…

SO HAPPY TOGETHER? | After putting Mina to rest in the cemetery, Malcolm tells wife Gladys that he’d like to come back home… but she’s not interested in his proposition. “You were happy once,” Gladys informs her husband. “We’ll stay married, despite all. I’ll live in the house here, and you stay in London. Or go to Africa. I don’t care.” And, having earned one last twist of the proverbial knife, Gladys adds: “We have no more children for you to save. Or kill.” Ouch.

ODD JOB | Having lost his job at the theater, Caliban heads into town to find new work — a fruitless search, until he stumbles upon a hole-in-the-wall wax museum. The affable manager is happy to give Caliban a job — pending final approval from the missus — in which he will help the manager construct a new series of wax displays, all of which recreate famous London killing sprees. (The next catastrophe on the agenda? The Mariner’s Inn Massacre, which the police are having quite a bit of trouble investigating.)

Later, Caliban meets the manager’s wife — calling himself “John Claire” throughout the pow-wow — and finalizes his new gig. He’s also introduced to the couple’s blind (and stunning) daughter, Lavinia, who asks to touch Caliban’s face upon meeting him. “It’s not a face for touching,” Caliban insists, but the girl does so anyway. (I know Caliban is hung up on getting an undead girlfriend, but might Lavinia actually be the perfect match for him?)

THE PERFECT STORM | Speaking of Dr. Frankenstein’s latest project, Victor submerges Brona’s corpse in a tub of water, waiting until a thunderstorm hits London to (hopefully) bring her to life. It’s touch-and-go for a while, but Victor’s plan is ultimately successful, and Brona rises from the water to be Caliban’s new mate. (The only problem? It seems like Victor is also infatuated with the woman, if his fascination with her naked body is evidence enough. Call me crazy, but I don’t think this can end well for the mad doctor and his monsters.)

OK, your turn. What did you think of Penny Dreadful‘s Season 2 premiere? Grade the episode via our poll below, then hit the comments to back up your choice. 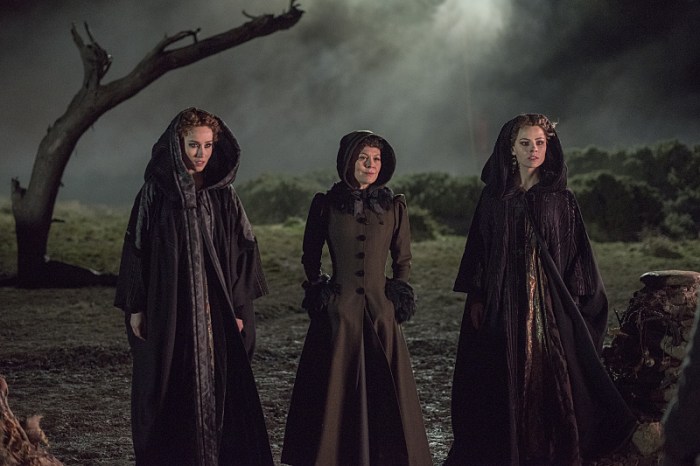