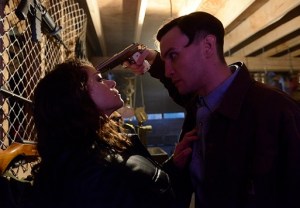 Man, they keep dropping like flies on Orphan Black this season.

Just one week after Rudy put Seth out of his misery, another Castor clone possibly bit the dust in this Saturday’s episode. Meanwhile, Cosima made a big discovery from Seth’s brains and Art confessed his love for one of the female seestras! Oh, and more than one mother proved herself to be a powerful force.

THE HUNT FOR MARK | After Art walks in on her and Felix trying to clean up the mess left by Seth’s dead body, the cop and Sarah team up to find Mark. They track down the midwife from the Prolethean compound, who reveals that Helena and Gracie are pregnant with Henrik’s babies. Along the way, Art divulges that he was in love with Beth and that he feels a need to protect Sarah because she is just as fierce as Beth. But Sarah points out that he’s no use to them if he gets suspended from his job, so Sarah continues in their mission on her own.

Meanwhile, Gracie wants to know why her hubby Mark won’t come to bed with her, especially now that it’s not a sin. (Maybe because the age difference looks creepy?) Eventually, he does succumb, after much button opening – man those Proletheans sure do wear a lot of buttoned-up clothes — but the afterglow is short-lived. Mark confesses he never left the army and he was assigned to recover valuable scientific material that Henrik stole. Gracie has an idea of who might be hiding it for her father and goes to retrieve it herself. However, the locked box is full of junk and Mark is forced to take matters into his own torturing hands.

Gracie gets another ugly wake-up call when she runs into Sarah at a diner and finds out she married one of the abominations. At that opportune moment, her mother Bonnie tracks down an emotional Gracie at the hotel. “He took advantage of you. And your stupidity,” she says with hug. Gee, so comforting.

Back at Henrik’s pal’s home, Mark has tortured the guy into a lethal heart attack when Sarah appears and drops a bombshell on him. Thanks to Cosima’s scientific efforts, they now know the Castor and Leda clones are brothers and sisters. Mark refuses to believe they’re family, and as he’s running away, he gets shot in the leg by Bonnie. “I love her,” he pleads, to which Bonnie replies, “Not like her mother,” before delivering another (fatal?) bullet. 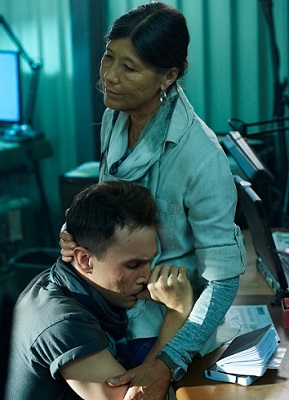 HOME BASE AWKWARDNESS | Things do not appear too copacetic at the Castor base, with an aura of tension surrounding Major Paul’s interactions with both Mother and Rudy. While her job is to cure the clones of their neurological defect, Paul’s is to protect them. But now there’s a weapons glitch, which means the program is one budget review from oblivion. To top it off, there’s a seriously weird vibe between Mother and Rudy, who clutches at her like a child and sucks his thumb. When he tells her that he wants to go back into the field, Mother promises to take care of Major. As for Helena, she doesn’t get tortured this week. (Yay!) Instead, she gets some stabs in at Rudy (“You are the ugliest Mark yet”) and Paul’s proclivity for getting into bed with her seestras. For his part, Paul declares, “I am sorry it has come to this.”

ALISON: PHARMACEUTICAL ENTREPRENEUR | Alison’s campaign for school trustee gets off to an expectedly amusing start – “I will speak to your children so you don’t have to!” – and her and Donnie’s new “soaps” business proves key. The customers/voters are flooding in even with the upped prices. (Clearly, the discount-for-referral program is working.) When Alison’s oblivious competitor challenges her, she replies, “Go sell a house, Marcie,” except that’s totally not what she’s saying at all.

BACK TO THE BOTTOM | We finally get an update on Dyad’s former top clone: Rachel’s having trouble with her motor skills, although she is making progress. (She recognizes the Project Castor symbol as “horses.”) Meanwhile, Delphine has covered up what happened to Rachel with a story about a plane crash. Delphine is really not to be messed with this season.

Orphan Black fans, what did you think of the episode? Do you think Mark is dead?