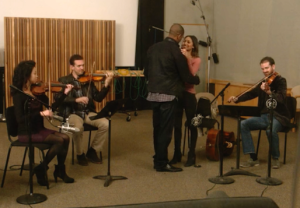 We may not have that new religion that’ll bring you to your knees, but we do have an all new TVLine Mixtape! 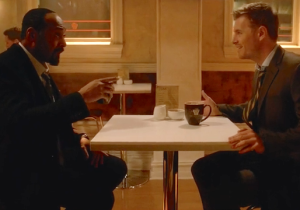 SERIES AND EPISODE | The Flash, “The Trap”
SONG | “Over & Over”
ARTIST | Smallpools
ALBUM | Smallpools – EP (2013)
WHY IT ROCKED | If you listened closely enough to the melodious pop song playing through CC Jitters, you could almost overlook the fact that Joe was denying Eddie his blessing to marry Iris because he’d prefer if his daughter wound up with Barry, his foster son. Yeah, that‘s not icky at all! 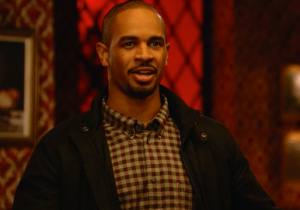 SERIES AND EPISODE | New Girl, “Panty Gate”
SONG | “Black Velvet”
ARTIST | Alannah Myles
ALBUM | Alannah Myles (1989)
WHY IT ROCKED | We never would have pegged Coach for an Alannah Myles fan, but her signature tune brought that “little boy’s smile” back to our favorite heartbroken roommate as he attempted to forget May. 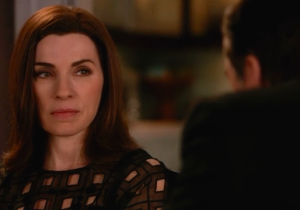 SERIES AND EPISODE | The Good Wife, “The Deconstruction”
SONG | “I Think It’s Going to Rain Today”
ARTIST | Lauren O’Connell
ALBUM | I Think It’s Going to Rain Today – Single (2015)
WHY IT ROCKED | This may have been the second episode in a row to end with Alicia in tears, but it was the first and only time those tears were prompted by a goodbye note from long-time-no-see friend Kalinda. Many of you wrote in asking about the ballad that married the scene, making it a Mixtape must! 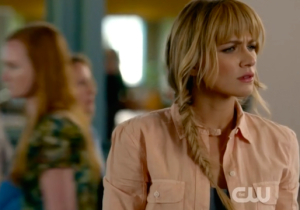 SERIES AND EPISODE | The Messengers, “Strange Magic”
SONG | “Strange Magic”
ARTIST | Electric Light Orchestra
ALBUM | Face the Music (1975)
WHY IT ROCKED | The song from which the episode got its title haunted its opening flashback as Michael went missing in the blink of an eye. 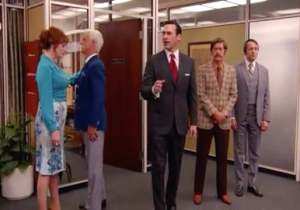 SERIES AND EPISODE | Mad Men, “Time & Life”
SONG | “Money Burns a Hole In My Pocket”
ARTIST | Dean Martin
ALBUM | Living It Up (1954)
WHY IT ROCKED | What a song choice! Perhaps if Don and the partners had also wished for the “millions of dollars” Martin wishes for in this jazz standard, SC&P wouldn’t be on the verge of a full-out absorption by McCann Erickson. 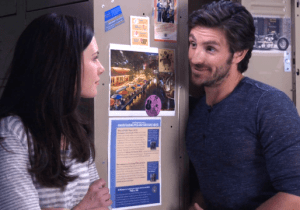 SERIES AND EPISODE | The Night Shift, “Hold On”
SONG | “We’ll Keep Running Forever”
ARTIST | Joshua Radin
ALBUM | Onward and Sideways (2015)
WHY IT ROCKED | The soothing vocals of this guitar-and-songman keep popping up in our favorite shows, and for good reason: they never fail to reinforce a feel-good moment. After Jordan and  TC talked out their issues, he took a moment by himself to look over the engagement ring he intends on giving the mother of his soon-to-be child. 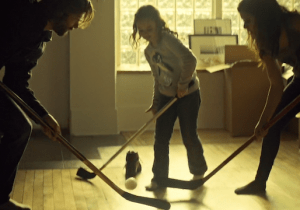 SERIES AND EPISODE | Orphan Black, “Transitory Sacrifices of Crisis”
SONG | “Go!”
ARTIST | Plumtree
ALBUM | Predicts the Future (1997)
WHY IT ROCKED | Could this show be any more Canadian? We’d be lying if we said that indoor hockey game didn’t look like fun, but we were much more interested in the pop-punk number accompanying their friendly match.