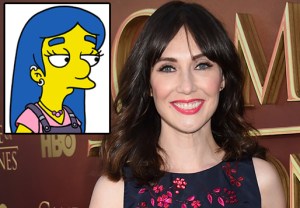 Carice van Houten (aka Game of Thrones‘ Melisandre) makes her Springfield debut on Sunday’s The Simpsons (Fox, 8/7c). But you don’t need to look into the flame to find out what will — and won’t — happen on her episode.

For starters, van Houten tells TVLine, don’t expect any Thrones references. “None at all,” she insists. “It’s a completely different thing.”

You can, however, expect to see her playing Milhouse’s Dutch cousin Annika, a character originally born out of a joke between van Houten and the writers.

“I follow a few of the writers on Twitter, and they were big Game of Thrones fans, so they invited me to a table read while I was in LA,” she explains. “When I arrived in the big room with the cast and crew, I felt like I was entering heaven. As they introduced the cast to the little audience, they said, ‘We have a very special guest,’ and they looked at me. I was like, ‘What?’ They joked about how I might be Milhouse’s cousin, but for me, that wasn’t a joke; I was like, ‘That would be the coolest thing to ever happen.'”

And van Houten’s not exaggerating. She says she’s been a die-hard fan of the show for the past 16 years, so this casting was a dream come true. (“My voice has never been pitched so high,” she says of her reaction to the news.)