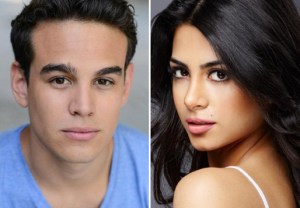 Two more key cast members from ABC Family’s adaptation of the Mortal Instruments books have finally stepped out of the shadows.

The network on Friday announced the casting of Alberto Rosende (Blue Bloods) as Simon, the handsome best friend of yet-to-be-cast protagonist Clary Fray, and Emeraude Toubia as Isabelle Lightwood, a lethal Shadowhunter with a weakness for bad boys.

Based on the novels by Cassandra Clare, Shadowhunters follows a young girl named Clary who discovers on her 18th birthday that she’s a Shadowhunter — a human-angel hybrid born to hunt demons. Following her mother’s kidnapping, Clary teams up with a fellow Shadowhunter named Jace (Dominic Sherwood) and her best friend Simon (Rosende) to fulfill her destiny.

Your thoughts on Rosende and Toubia’s casting? Drop ’em in a comment below.