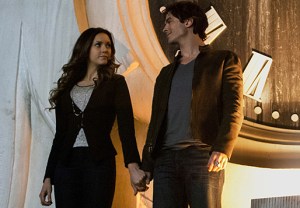 After a hellish few weeks of dimension-jumping and humanity-awakening, The Vampire Diaries slowed things down a bit on Thursday to examine each of the characters’ next steps.

Is Damon “ready” to start a new human life with Elena? Is becoming a cop, and potentially killing someone, too much for former werewolf Tyler to handle? Should Alaric and Jo leave Mystic Falls for the sake of their new family? And how do you solve a problem like Lily Salvatore?

Let’s start by tackling that first question: No, no he is not. Elena took the cure all by her lonesome this week, triggering a return of her memories, a renewal of her feelings for Damon and, unfortunately, a major vulnerability against Lily, who went all one-eyed ripper on her future daughter-in-law. (Full disclosure: I might have taken some editorial liberty with that description, but I stand by it.)

Though the brothers Salvatore were able to sedate their mother, they weren’t able to quell Damon’s inner-conflict about whether or not to take the cure. “You’re so afraid of losing me that you’ve convinced yourself you can endure a human life,” Elena insisted. And it looks like next week’s episode will only further complicate Damon’s decision… as if you thought it was going to get easier. 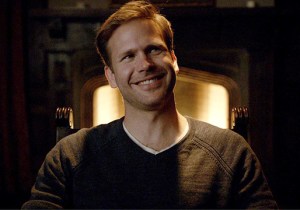 WHOA, BABIES! | The only thing I love more than Alaric Saltzman’s apparently endless collection of plain sweaters is his apparently endless amount of love for Jo and their future child… actually, make that future children. We learned this week that Jo is carrying two humans in that baby basket (confession: I don’t know how kids are made), triggering a beyond-words-beautiful speech from her future husband about how keeping his family safe is his only priority. Does that mean he might actually take up Matt’s suggestion to leave town with Jo and the kid(s)? I hope not; this cast is already dropping like flies! 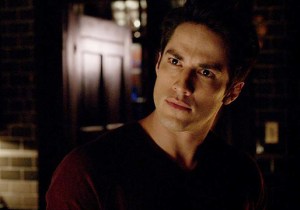 ANGER MANAGEMENT | OK, let’s get one thing out of the way first: that Matt/Tyler confrontation was weirdly hot. Even Michael Malarkey couldn’t help but ship the best friends as Matt coerced Tyler into a fight, all in the name of building up his tolerance for anger. After all, if Officer Lockwood accidentally kills someone — an oddly topical issue for this show to touch upon, by the way — he’d be forced to wolf out all over again. (Not that we really have to worry about that, since this is Tyler’s third-to-last episode on the show… but I digress.)

WOMAN ON THE VERGE… | And then there’s Lily, who not only ruined Jo’s bachelorette party — she did everything but eat the stripper, to be honest — but also tried to make a meal out of newly-human Elena. After she attempted to kill her lonely self, she was sedated and locked in the Salvatore dungeon, but her threat to destroy what Stefan loves — the mysteriously M.I.A. Caroline Forbes, perhaps? — felt anything but idle. I guess it didn’t help that, in the episode’s final moments, we saw Kai and the Heretics about to break free from their prison world. (As if it wasn’t enough that she crashed Jo’s bachelorette party, Lily and her friends have to go and ruin her wedding too? Not cool, Mama Salvatore.)

TVD fans, time to weigh in: Are you glad Elena is human again? Do you think Damon will take the cure? And what nasty tricks do you think Kai has up his sleeve? Drop a comment with your thoughts and theories below.