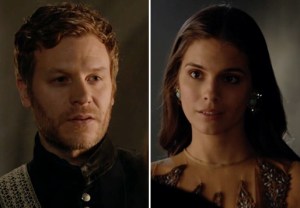 At this point, Bash and Kenna’s relationship on Reign is hanging by a thread — and newcomer General Renaude appears to be sharpening his scissors.

“It’s pretty obvious from their first episode together that there’s a spark of something that could happen,” Renaude’s portrayer, Vince Nappo, tells TVLine. “They’re both very honest with themselves and other people when they’re making tough decisions. They do things because it’s exactly what they need at that moment. They’re also both being held in place, so they had this immediate connection in the woods. I think we’re going to see that progress.”

And things are only going to get messier as, per The CW, Kenna “crosses a line” with Renaude on Thursday’s episode (9/8c). Of course, Renaude’s intrusion into the world of Kash — or is it Benna? — doesn’t come without some considerable guilt, at least on Nappo’s part.

“I started to cram when I first got the part,” he says. “All of the relationships are so important, and there are so many different combinations, but then I have to try to forget that I know it when we’re filming; Renaude has no idea who Bash is.”

And Nappo knows viewers aren’t going to love him for coming between a fan-favorite couple. In fact, being seen as a troublemaker is something he came to terms with fairly early on.

“I guess that’s going to happen when you kill a man with your bare hands in your first scene,” he says. “I’ve done quite a bit of stage combat over the years in theater, but never on camera, so that was awesome.”

Reign fans, are you still holding out hope for Bash and Kenna to get over their issues? Drop a comment with your thoughts on the couple below.