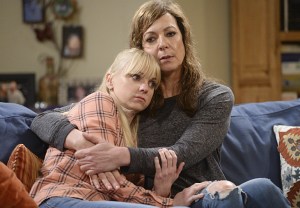 A surprising exit shook up Mom‘s Season 2 finale, as little Roscoe demanded to move in with his father Baxter and out of the increasingly toxic home shared by his mother Christy and grandmother Bonnie.

Of course, maintaining the laughter throughout a story arc that began with Bonnie’s relapse into drug and alcohol abuse — and the subsequent, seething resentment of fellow alcoholic daughter Christy — proved to be “the most challenging work” of executive producer and co-creator Chuck Lorre’s career. “We always have to honor the fact that we are a comedy — and I don’t want to lose sight of that,” he tells TVLine. “But at the same time, the promise from the very beginning of the series was to tackle real-life issues that impact everyone.”

To that end, Thursday’s episode followed Christy as she, too, made the decision to move out from under Bonnie’s roof — only to find that her friends’ and family’s various abodes didn’t fit her any better. In the final scene, Anna Faris’ alter-ego wound up back on the living room couch, in the arms of her mother (who unbeknownst to her, had been futilely pursuing her via bicycle) and pondering the power of second (and third and fourth) chances.

TVLine pressed Lorre for details on the decision to have Farris and co-star Allison Janney only interact at the start and end of the installment, the show’s evolution into a strong female ensemble piece, and the ideas he and the show’s writing team set in motion for Season 3.

TVLINE | It feels like you were planting seeds of Roscoe’s discontent all season — from the minute he moved into the closet-sized bedroom. How far back did you make the decision to have him move in with his dad?
We planned that out a few episodes in advance — that all the volatility in the household would take a toll in the finale.

TVLINE | The last few episodes of the season, we saw Christy angrier than she’s been at any point in the series. Was that always the direction you wanted to go after you decided Bonnie would relapse?
One of the first questions we had was who Bonnie’s slip would impact — and how it would really give Anna’s character a chance to really feel what she’s feeling about her mother. In an odd way, it’s Christy who’s paying the price emotionally for Bonnie’s relapse into drugs and alcohol. And that’s a story that doesn’t get told very often – certainly not in a sitcom. The arc was also a great opportunity for Anna also to portray a wide range of emotions. Take that scene at the end of last week’s episode, where Christy’s in an AA meeting — and she recognizes her anger is tied to the fear she had as a child: If her mom’s not OK, she’s not OK.

TVLINE | We also had Christy’s doozy of a line mid-epside: “The road to happiness leads away from your mother.”
That was just anger. The road to happiness, really, is the road to self-responsibilty and self-awareness. That’s the only road I’m aware of. Christy just wasn’t able to cope with the idea of losing her son. 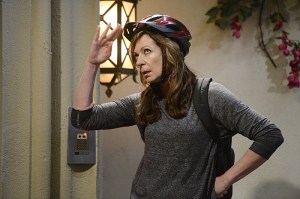 TVLINE | The finale structure was interesting: Christy bouncing from home to home, Bonnie chasing after her via bicycle. How did you land on that?
We wanted Anna’s character to be on a journey — one that led back to home. Somewhere along the line, we realized there were two stories happening: One about running away, the other about Bonnie chasing, trying to make amends, trying to make it right. And the way to do that was to chase after her and not succeed. But then we had the great opportunity to write that scene for them at the end of the episode, on the couch — where Bonnie still didn’t admit she was chasing. We kept her character in tact. [Laughs]

TVLINE | Two years into her sobriety, life is still not easy for Christy. That line where she says she has tried to be a good mom and it’s not enough, that was heartbreaking. With such a blow to her confidence, where do you see her going in Season 3?
Let’s not overlook the fact that in two years of sobriety, she’s moved up to being manager of the restaurant and she’s gone back to college. And she’s not counting on a romantic relationship to save her; she’s counting on herself. That’s enormous growth — she may not know this, but I hope viewers do. There is a “two-steps-forward, one-step-back” element to her story, but that’s just life. When you think you’ve got everything figured out on the left-hand side, the right-hand side starts to act up. Sobriety does not equal a perfect life. It gives you a chance at participating in your life.

TVLINE | It’s pretty unusual to have any TV show with an attractive, female lead character go an entire season without any serious dive into her romantic entanglements.
That was really by design. I really wanted this year to be about these women and their personal journeys. What you normally do in these kinds of shows is to race into [romantic] relationships and find the comedy there. But these women are discovering themselves — and that seems to be enough. It’s certainly refreshing and challenging to write about. We’re very proud of that. There’s nothing wrong with [romance], and we’re not running away from it, but these characters are on different journeys at this point in their lives.

TVLINE | And Mom has definitely evolved into this powerhouse female ensemble… Mimi Kennedy as Marjorie…
Our Obi-Wan Kenobi! [Laughs]

TVLINE | And then Jaime Pressly and Octavia Spencer… When you created the pilot, did you ever imagine the show growing into what it is now?
All we could see at the beginning were Anna and Allison. It slowly developed — and thankfully we were able to stay on the air long enough — to try to make these other women more dimensional. It’s an incredible ensemble right now. You watch these scenes with Jaime and Octavia and Mimi — in addition to Anna and Allison — it’s pretty astonishing. 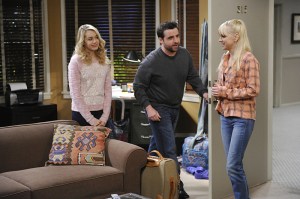 TVLINE | Violet’s relationship with her professor (David Krumholtz) did not exactly end on a positive note — as he wound up sleeping on the couch after wanting to smoke a joint during Christy’s visit. Will their relationship continue in Season 3?
[Laughs] How great is that man? He’s hilarious — such a smart and crafty actor. I’m hoping we can continue that relationship. [Gregory] is actually a good influence for Violet — it’s a strange relationship, but sometimes those work.

TVLINE | What parts of the Season 2 finale are tip-offs for what to anticipate when you return next fall?
The hope for the series is the unconditional love this mother and daughter have for one another — how it allows them to stumble forward. Their lives change and grow. It’s clumsy. But there’s strength in numbers, in community, in family. I believe that strongly. These other women become extended family, and they hold one another up.