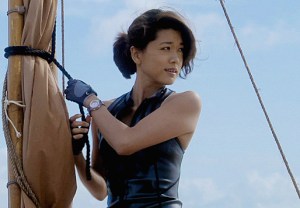 Hawaii Five-0‘s Grace Park is endeavoring to explain just how cold it can get when filming a scene out on the water surrounding our 50th state (not that we ever doubted her a bit).

“I know — it’s Hawaii, so you think, ‘What’s she talking about?’ But why don’t I put you in my little outfit and put the north winds on you for a few hours, and see how you do!” she contends, letting out a laugh.

Park’s brief lesson in Hawaii weather systems came as she related the most arduous part of filming this Friday’s episode (CBS, 9/8c), in which Kono sets out to fulfill her mother’s own, onetime wish, to circle the islands solo on an outrigger.

“It doesn’t go as smoothly as she thinks it’s going to go,” Park previews. “She’s on what is essentially a three-man boat, but you could do it by yourself, if you had glassy water. You definitely don’t want 20-foot waves.” Alas, Kono runs into a storm that she predicted would pass in a different direction, setting the stage for a grueling odyssey at sea. 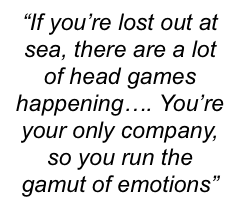 Filmed partly on the open ocean, partly adjacent to a sand bar, and with a bit of pool work thrown in (for the most intense sequences), “The episode really is an experiential one,” Park says. “The audiences goes with Kono, which is almost like traveling the psyche with someone. Because if you’re lost out at sea, there are a lot of head games happening, lots of fears you have to battle, maybe from hallucinations…. You’re your only company out there, so you run the gamut of emotions and thoughts, about living and dying.”

And though the actress will underscore for you the chill the aforementioned north winds can bring, Park makes clear the end result of this extreme outing was a joyous thrill. “Yeah, it was a little insane when they dump like 70 gallons of water on you from above and you have water cannons and wind machines and wave machines in the pool, and rain towers — but it was still fun,” she asserts. “It feels really, really good to just apply yourself and work hard towards a result in one episode,” versus across a whole season. “It’s more rewarding.”

Regardless of whether she circles the islands as planned, Kono gains “a life experience” through the ordeal, Park says. She also presumably survives, seeing as the back half of the double-episode finale (airing May 8) marks the day of Kono’s wedding to Adam. With a loose nuclear bomb being chased by the Five-0 team — and perhaps for other reasons — “It’s debatable whether the wedding goes off or not,” Park teases. Then again, she notes, “It’s not an episode about a wedding,” since the producers didn’t wish to serve up a replica of Chin Ho’s own big day. “That was actually kind of refreshing in some ways,” the actress says. She then adds with a chuckle, “But I actually did feel a bit ripped off. Like, ‘What? OK….'” 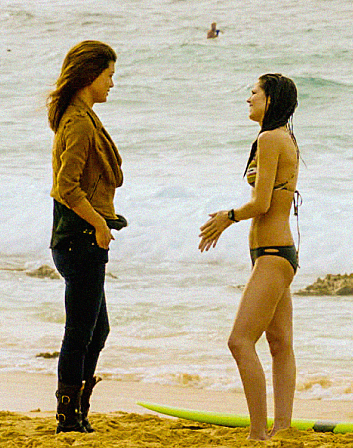 (that’s not about a wedding) also marks the return of Michelle Borth as Catherine Rollins, teasing a scenario where Park isn’t the series’ lone female crimefighter. (Amanda Setton has recurred this season as M.E. Dr. Mindy Shaw.) “They tried a number of times — Michelle I think was the third one? — to have a female be a part of Five-0, so when she left I did feel a bit like, ‘I guess it’s not happening,'” Park laments. As such, “I was completely shocked that Michelle was coming back. I even told her that, because I was really surprised.

“It’s a strange thing,” Park says of the revolving door of women. “I don’t know why it has gone this way, but for whatever reason it has.” Which is not to knock any of the male series regulars that were added this season. “They’re lovely and funny and awesome — there are no complaints there,” she says. But despite all of Chi McBride’s considerable talents, we point out, he’s just not a woman. “No, he’s not!” Park concurs with a laugh. “And the same with Jorge Garcia. They’re both very male!”